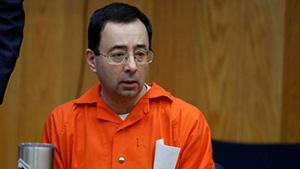 The number of known sexual abuse victims of former USA Gymnastics doctor Larry Nassar has grown to 265, a Michigan judge has said.

At least 65 victims are set to confront Nassar, 54, in court this week in the last of three sentencing hearings, prosecutors say.

He was sentenced last week to 40 to 175 years in prison after nearly 160 women testified that he had molested them.

In the current hearing, the court is sitting to sentence him for molesting patients in the back room of Twistars gymnastics club in Dimondale, Michigan.

The former Michigan State University (MSU) physician pleaded guilty in November to three counts of first-degree criminal sexual conduct against girls for whom he was supposed to be providing medical care.

At least one of the sexual assaults included a victim younger than 13. Two of the victims were abused at 15 or 16 years old.

On Wednesday Judge Janice Cunningham told the small court in Charlotte, Michigan: “We have over 265 identified victims and an infinite number of victims in the state, in the country, and all over the world.

“As a result, by allowing live streaming and tweeting, all individuals are able to participate in this process.”

The first to speak was 17-year-old Jessica Thomashow, who told the court:”He first molested me when I was nine (…) before I had braces, and when I still played with my American Girl dolls.

“Larry Nassar preyed on us for his own pleasure, leaving in his wake traumatised and broken girls.”

She described him as “evil” and “a criminal of the worst kind”.

Ms Thomashow’s older sister was also abused by the doctor while studying at MSU.

In this final sentencing, a minimum of 25 to 40 years is expected to be added to Nassar’s prison sentence.

The hearing is scheduled to last three days as women line up to deliver victim-impact testimony.

USA Gymnastics says every director of its board has now resigned in the wake of the scandal.

The US Olympic Committee demanded the board step down by Wednesday or face losing its governing authority.

“We are in the process of moving forward with forming an interim board of directors during the month of February,” said a statement by USA Gymnastics.

About 140 victims are suing Nassar, USA Gymnastics and MSU, seeking monetary damages from institutions they accuse of ignoring the allegations.

Michigan’s attorney general has launched a criminal investigation into MSU.

Protests erupted among students and faculty after MSU’s board unanimously appointed former governor John Engler to serve as interim president.

Several students and faculty members said they were blindsided by the choice and were not asked for input.

Texas Governor Greg Abbott has ordered an investigation into the Karolyi Ranch.

Scores of Nassar’s victims were abused at a Texas training camp for the US gymnastics team.