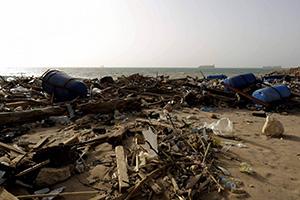 The latest episode of this saga, a uniquely Lebanese story at this point, will first affect the citizens of Zouk, before spreading across Lebanon’s different cities and towns.

by Georgi Azar and Zeina Nasser

BEIRUT: Lebanon was once synonymous with clear waters and white sands, with its renowned Mediterranean beaches rivaling those of the French Riviera.

Yet the current reality can only be described as a national tragedy.

The Lebanese government’s inability to properly deal with the ongoing waste crisis which began in the summer of 2015 has reared its ugly head once again, manifesting itself in one of the most shocking sights to date.

Lebanon has witnessed a massive waste crisis ever since its primary landfill in Naameh, south of Beirut, was closed in July 2015 after years of operational extensions. It was opened in 1998 as a temporary fix but had been worn down for over 18 years, holding 15 million tons of trash, following the expiry of the country’s sole waste management service provider “Sukleen”.

The four-year crisis – enveloping the nation in a nasty stench – has seen authorities implement numerous Band-Aid solutions, from failed recycling centers to random waste burning sights and the opening of the “temporary” Costa Brava and Bourj Hammoud landfills, situated along Beirut’s coastline.

The landfills, long criticized by environmentalists as an unsustainable disaster in the making, are the cause of this latest catastrophe.

Over the weekend, Lebanon was hit by a severe storm with swirling winds and heavy waves striking its coastline, which culminated in an enormous trash pile up on a patch of beach in Zouk, Keserwan.

Dr. Milad Fakhri, Director of the National Center for Marine Sciences (NCMS), corroborated that claim, telling Annahar that “most of the trash on the shore of Zouk emanated from the Burj Hammoud landfill.”

As Lebanese awoke on Monday morning to these shocking images, a potent reminder of the country’s dysfunctional political system, it became evident that the everlasting delays in implementing a sustainable national strategy for waste management have led to an “environmental disaster,” Dr. Michel Bariche, Marine Biologist professor at the American University of Beirut, told Annahar.

The consequences of unprocessed and untreated waste piling up on Lebanon’s beaches are wide-ranging says Bariche, due to the complex composition of Lebanon’s trash.

This blatant disregard to the country’s sea will impact its ecosystem and different maritime species along with their habitats, “infecting animals and fish as toxins accumulate in their flesh which can later be transmitted to humans who consume them,” according to Bariche.

This sentiment was echoed by Fakhri as well, reiterating that “danger lies in the non-biodegradable nature of some of the waste.”

He added that, with time, these can be fractured into small particles and swallowed by maritime creatures, be it fish, sea turtles or otherwise, as it enters their food cycle, leading to intoxication.”

The latest episode of this saga, a uniquely Lebanese story at this point, will first affect the citizens of Zouk, before spreading across Lebanon’s different cities and towns, Public Health Doctor Dr. Hussein Sabra told Annahar.

“People will be subjected to various medical problems, from severe Diarrhea to intestinal infections as a result of exposure to waste pollution,” said Sabra.

The extent of the damage on Lebanon’s environment will not be fully measurable at the time being, however, “as unprocessed waste continues to fester with each passing day”, added Fakhri.

Lebanon’s coastline has long been a source of income for thousands of families who have been fishing the waters of the Mediterranean off Beirut, yet this latest setback will surely carry economic implications as well.

A statement by the Council for Development and Reconstruction, tasked with implementing a comprehensive waste management plan, was quick to defer these accusations, claiming that Monday’s trash pile up in Zouk was carried downstream from Nahr el Kalb as a result of heavy rainfall.

Nahr el Kalb is home to a bevy of intertwined rivers used as one of many remote dumping sites at the peak of the crisis that have yet to be properly cleared out by the authorities.

According to the CDR, a committee will be formed to investigate the circumstances of this disaster and put forth a report assessing the damages while assigning responsibilities, a development welcomed by Prime Minister Saad Hariri who announced the start of a thorough cleaning process along the polluted shoreline.

The situation has gotten so dire that the Human Rights Watch (HRW) initiated a campaign last week to raise awareness on this impending health hazard, urging Lebanon’s Cabinet to adopt a “national strategy that covers the entire country and complies with environmental and public health practices and international law.”

On January 19, HRW launched a billboard to end this crisis, while introducing an online petition to put a stop to the dangerous practice of open burning, as the authorities’ lack of action is “posing serious health risks for nearby residents”, while “violating their right to health under international law.”

On January 11, Cabinet approved a waste management plan, brought forth by the Environment Ministry, which outlines a decentralized waste management system on the basis of reducing, sorting and recycling while calling for the gradual closure and rehabilitation of open dumps.

“Municipalities will now be responsible for their own waste management,” said Minister of the Environment Tarek Khatib last week, adding that “our aim now is not to permit waste to riddle our streets again.”

It seems that this long-awaited initiative has fallen on deaf ears, with Kataeb leader and MP Sami Gemayel blasting the “ruling authority directly responsible for this environmental disaster.”

Speaking to reporters Monday at the site of the disaster, Gemayel delivered his most scathing remarks yet, saying “I am speechless at the tremendous amount of garbage on our shores.”

“We demand the resignation of Environment Minister Tarek Khatib and that the company in charge of waste dumping be held accountable.”

There was a sense of anger and despair among Zouk residents in the wake of this devastation.

A public sector employee, who spoke to Annahar on condition of anonymity, laid the blame at the feet of the “corrupt ruling class.”

“This crisis will surely affect us, but nothing surprises us anymore,” she said, adding that “we are all aware of the corruption surrounding us, which is why we need to elect new leaders.”

De Gaulle Karam, a mini-market owner in the area, struck a sarcastic note on the other hand, telling Annahar that “Lebanese who travel abroad will get sick because they are used to living in trash.”

However, a consensus does exist within Lebanon’s civil society and academic circles regarding a viable solution, with Bariche laying it out bluntly: “Reuse, reduce, and recycle.”