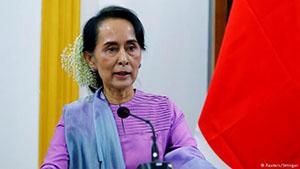 Police have opened an investigation into an attack on the house of Aung San Suu Kyi. The leader has faced wide condemnation for her handling of the Rohingya situation in Myanmar.

A Molotov cocktail was thrown at the home of Myanmar’s leader Aung San Suu Kyi’s on Thursday.

Although the attack caused only minor damage, it comes at time of growing tension over a leader that is beloved at home, but who has recently drawn widespread condemnation abroad over her response to the treatment of Rohingyapopulation in Myanmar.

Government spokesperson Zaw Htay confirmed the attack and announced that an investigation process would begin. Htay added that the Nobel Laurette was not home when the incident occurred.

Police released photos of a potential suspect, a short haired man of approximately 40 years of age, who was wearing a pink shirt and blue longyi – a type of long cloth tied around the waist. Authorities have asked the public to provide police with any information they may have about the man.

The attacked home of Aung San Suu Kyi is the same one where she spent 15 years under house arrest. She was released in 2010 and became Myanmar’s de facto leader in 2015, after winning a landslide election. Her democracy advocacy earned her the Nobel Peace Prize in 1991.