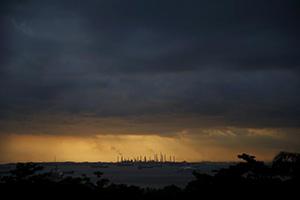 London Brent crude for April delivery was up 10 cents, or 0.1 percent, at $68.99, after settling up 3 cents in the previous session.

U.S. crude oil production in November surpassed 10 million barrels per day for the first time since 1970, and neared the all-time output record, the Energy Information Administration said on Wednesday.

Oil output by the Organization of the Petroleum Exporting Countries also rose in January from an eight-month low as higher output from Nigeria and Saudi Arabia offset a further decline in Venezuela and strong compliance with a supply reduction pact, a Reuters survey found.

However, adherence by producers included in the deal to curb supply rose to 138 percent from 137 percent in December, the poll found, suggesting commitment is not wavering even as oil prices hit their highest level since 2014.

“OPEC nations realize that lower production would buoy oil prices and that it’s better for them,” Akuta added.

Oil prices are unlikely to advance much above $70 a barrel in 2018, with the market caught between the opposing forces of OPEC-led production cuts and surging U.S. output, a Reuters poll showed on Wednesday.

But prices rebounded on the back of a surprise 2 million-barrel drawdown in gasoline stocks, helping push up gasoline futures.

Distillate stockpiles, which include diesel and heating oil, fell by 1.9 million barrels, versus expectations for a 1.5 million-barrel drop, the EIA data also showed.

Kuwait Petroleum Corp expects to spend over $500 billion as it boosts its crude oil production capacity to 4.75 million barrels per day in 2040, the national oil firm said on Wednesday.