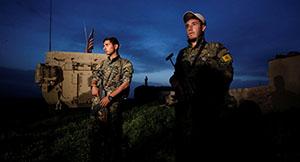 The Syrian Democratic Forces (SDF) – the U.S. backed militant group in Syria dominated by the Syrian Kurdish People’s Protection Units (YPG) – has started moving their forces to the country’s north in reaction to Turkey’s “Operation Olive Branch” in Afrin, the Pentagon has said.

“We are aware the SDF has repositioned some forces in response to recent tensions, however this was not under coalition direction,” Pentagon spokesperson Adrian Rankine-Galloway said in a statement to Hürriyet on Jan. 30.

The spokesperson did not detail the location of the repositioning but said “these movements of forces are not conducted under the direction or with the support of the coalition,” he said, referring to the U.S.-led coalition against the Islamic State of Iraq and the Levant (ISIL).

The U.S. support for the YPG has created a row between Washington and Ankara since Turkey considers the YPG as a terrorist group for its links to the outlawed Kurdistan Workers’ Party (PKK).

“We are fully engaged in working with our Turkish ally to de-escalate tensions along the Turkish-Syrian border and to ensure the lasting defeat of ISIS,” Galloway said, using another acronym for the ISIL.

“We are closely monitoring the situation in northwest Syria. Turkey clearly has legitimate concerns and they have a need for secure borders. We believe the presence of U.S. forces is helping to calm the talk about violence which could de-stabilize the situation during what is a critical time for the local population to be able to establish security against any resurgence of ISIS or of terrorist ideology,” he said.

“Our partnership with the SDF is limited in scope to operations to defeat ISIS,” he added.

“Kurdish forces that are engaged with Turkish forces near the Afrin region do not have any affiliation with the global coalition whatsoever,” he also said.

Turkey launched “Operation Olive Branch” on Jan. 20 alongside the Free Syrian Army (FSA) in the northwestern Syrian district of Afrin to clear its border of the YPG and the ISIL. Ankara has also vowed to expand the operation to cover the Manbij area of Syria where YPG troops along with U.S. forces are located.

“The coalition’s only official relationship in Manbij is with the Manbij Military Council, a majority-Arab force aligned with the SDF and created to fight ISIS. Our larger partnership with the SDF is limited to operations and activities that they undertake to defeat ISIS,” Galloway said.

Votel said withdrawing U.S. forces from Manbij is “not something we are looking into,” the broadcaster reported.