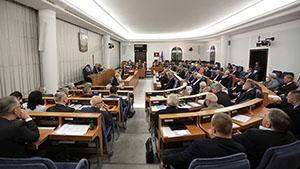 Poland’s Senate has approved a bill that outlaws blaming Poles for the atrocities committed in WWII death camps on Polish soil, or even using the phrase “Polish death camp.” The bill earlier infuriated Israeli leaders.

The upper house of the Polish parliament approved the bill with 57 votes for the motion and 23 against. There were two abstentions. To become law, it now needs only to be signed by the country’s president, Andrzej Duda.

Under the new legislation, using the phrase “Polish death camp” or otherwise implying that Poles were complicit in Nazi crimes during WWII can result in up to three years in jail.

The measure, championed by the ruling and right-wing Law and Justice Party (Pis), drew strong denunciation from the Israeli government, Jewish rights groups and politicians. The bill’s critics argued that it’s designed at whitewashing history, in particular, some Poles’ complicity in the Holocaust and restricting scholarly research on the topic.

Israeli Prime Minister Benjamin Netanyahu condemned the bill as a “distortion of the truth, the rewriting of history and the denial of the Holocaust.”

After the Israeli ambassador to Poland joined calls to repeal the yet-to-be-signed legislation during her speech in Auschwitz, Poland’s Institute of National Remembrance (IPN), a state research entity, accused Israeli authorities of “inappropriate interference” in the country’s internal affairs.

Washington, which has so far remained silent on the issue, chimed in Wednesday, with State Department spokeswoman Heather Nauert saying the US is “concerned” that “if enacted, this draft legislation could undermine free speech and academic discourse.” With that, though, she noted it would be “inaccurate, misleading and hurtful” to refer to death camps operated by the Nazis in Poland as “Polish.”

The bill, which also outlaws the so-called “Bandera ideology” of Ukrainian nationalists and criminalizes the 1943-44 massacres of Poles and Jews in Volhynia and Eastern Galicia, did not sit well with the Ukrainian government.

Ukraine’s Foreign Ministry accused Poland of politicizing common history and promoting a “one-sided interpretation of historic events.”Noting that Ukrainians, on par with Poles, have been victims of “totalitarian regimes,” the ministry blasted what it labelled as “attempts to portray Ukrainians exclusively as ‘criminal nationalists’ and ‘collaborators’ of the Third Reich.”

Lawmakers from the Ukrainian nationalist party Svoboda went as far as to demand Ukraine’s Foreign Minister Pavel Klimkin step down, accusing him of being unable to stop Poland from adopting “unprecedentedly offensive” legislation.

Bandera was a Ukrainian nationalist forces leader when they carried out a brutal ethnic cleansing campaign in Volhynia and Eastern Galicia in 1943-44. It is estimated that between 76,000 and 106,000 Poles might have perished during that time. In 2000, Bandera was awarded a Hero of Ukraine medal, which was subsequently retracted following an international backlash.