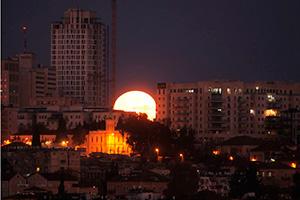 Much of the world looked up to the skies Wednesday in search of the “super blue blood moon,” a rare celestial phenomenon that hasn’t occurred since 1982.

The spectacle was particularly captivating because it was the convergence of three rare events: a supermoon, blue moon, and total lunar eclipse — which turns the moon orangish-red, hence the “blood” description. There won’t be another so-called “super blue blood moon” until 2037.

The rarity of the Instagram-worthy sight meant many people all over the world woke up early to catch a glimpse of the unique lunar eclipse. The eclipse’s totality began around 7:41 a.m. (E.T.).