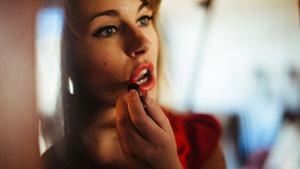 Last month, executives at US pharmacy chain, CVS announced a plan to make over their beauty aisles. The lipsticks, mascaras and bottles of beauty ephemera aren’t going anywhere, but the images used to sell those little jars of hope are in for a change. This is the rough equivalent of Australia’s Priceline deciding to change the way their brands advertise. In other words, it’s a big deal. The first component of CVS’s two-part plan to celebrate “authenticity and diversity” is a commitment to new standards for all CVS-generated beauty imagery. By 2020, “material alteration” of these images will no longer be allowed.

Dove now enjoys a moderate amount of notoriety for their “Real Beauty Pledge” which includes a promise to “never use models” and publish photographs with “zero digital distortion”.

But CVS can’t guarantee that the brands they sell in their shops won’t feature models who have been digitally altered, so they’re getting around this by providing a “CVS Beauty Mark.” This watermark (a little heart broken by straight lines) will be used to shame those brands that won’t quit the air-brushing game. It’s a quick warning for customers, a way of telling us that what we’re seeing isn’t real. This idea is wonderful in the abstract, but my own research and studies conducted by others suggest that it is unlikely to be effective. It may even backfire.

Researchers have known for decades that exposure to overly perfected beauty images can lead to body dissatisfaction, depression, anxiety and even eating-disordered behaviours in girls and women. These images trigger a simple but destructive comparison process. Step 1: See image. Step 2: Compare yourself to the model in the image and come out on the losing end of that comparison. Step 3: Feel the shame that comes with that sense of falling short. Step 4: Repeat this process countless times a day until your heart breaks just like the one in CVS’s new warning logo. (As marketers well know, there’s another step that often follows: Buy a product to inch yourself closer to that unreachable beauty ideal.)

The general idea behind the types of disclaimer labels CVS has proposed is that they will interrupt this comparison process. After all, if you know an image isn’t real, why compare yourself to it? Unfortunately, research shows that warning labels don’t appear to disrupt this process. Instead, they have the potential to increase the potency of beauty images.

One eye tracking study conducted at Flinders University in Adelaide demonstrated that women do notice these warning labels, but the labels often direct women’s attention precisely to the areas of the image that were airbrushed. Without a “before” picture to go along with the label, you can’t know how, exactly, the image was altered. So you’re left with a curiosity that can drive you to pay more attention to the image. In other words, women may focus more on the potentially harmful components of these images after being warned about them.

Two additional studies from Flinders University found that among women already prone to comparing themselves to media images, viewing an image with a warning label increased body dissatisfaction relative to seeing an image without a warning. Likewise, research out of the University of Michigan showed that making adolescents aware of retouching in beauty images left them feeling worse about how they look and more objectified.

One could argue that even if these disclaimers don’t interrupt the comparison process, they could have the benefit of teaching women to be more critical about media images of female beauty. Maybe that critical stance could be protective. Once again, the data aren’t as clear as you might guess.

My lab at Northwestern University created a self-report measure of women’s tendency to critique the beauty standards they see in media images. After surveying hundreds of women, we learned that many are highly critical of unrealistic beauty images. The bad news is that there was no evidence that this protected women from the effects of these images. In fact, women who were most critical reported higher body dissatisfaction.

In another study I conducted, just under 200 college women wrote down the thoughts they had while looking at beauty images from women’s fashion magazines. They wrote things like, “God she’s pretty. Why can’t I be that pretty?” But the same women who longed to look like these airbrushed models were also extremely critical of the images. Over three-quarters listed at least one thought that demonstrated a critical evaluation of the beauty messages these ads were sending.

For example, one woman wrote: “Nobody looks that good in real life. The picture has been retouched about 1000 times to make her look that good.” They even readily identified the type of damage these images can do. A different woman wrote, “This picture and others like it is why many of my friends starve themselves.” But these critical arguments did nothing to stop the women from comparing themselves to these models or wanting to look like them. One wrote, “I know she has fake eyelashes, but I would like my eyelashes to be like hers.”

We may never fully escape the ongoing beauty pageant that appears to be the birthright of every woman in this culture, but getting knocked down a bit less along the way is a move in the right direction. If CVS wants to give us a kinder, gentler version of beauty – one that allows for imperfections and a broader conceptualisation of what it means to beautiful, I’m all for it. But that little broken-heart warning label is unlikely to have the outcomes many hope for.

When you see a beauty image adorned with that heart, you may end up spending more time processing the image than you otherwise would have, and that’s not good for any woman’s mental health. We’re better off spending less time in the beauty aisle altogether.

Renee Engeln, a psychology professor at Northwestern University, is the author of “Beauty Sick: How the Cultural Obsession With Appearance Hurts Girls and Women.”