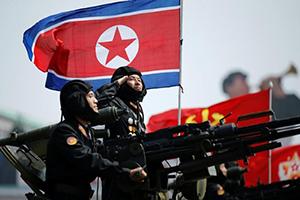 Since last summer, National Security Advisor H.R. McMaster has been building a case for the use of preventive force against North Korea. In interviews and public statements, he has called Kim Jong Un, the leader of North Korea, irrational and undeterrable. The implications of such a characterization are important: If a leader is irrational, he is, by definition, incapable of making the cost-benefit calculations necessary to ensure his own survival. No one can affect his cost calculations.

McMaster has also said that he believes Kim is acquiring nuclear weapons and long-range missiles to help him conquer South Korea. (Bringing a reunified Korean Peninsula under Pyongyang’s control has long been a goal for North Korea.) Under this logic, if Kim can threaten the U.S. homeland with his intercontinental ballistic missiles (ICBMs), he’ll be able to hold U.S. forces at bay while he tries to take the South. Nuclear deterrence and U.S. military superiority, in other words, would not be enough to halt Kim’s mission of peninsular conquest. New reporting now indicates that Victor Cha, the Trump administration’s nominee for the position of ambassador to South Korea, is no longer under consideration for the post, in part because of his misgivings about using force against North Korea. The administration’s interest in striking the North appears to be all too real.

In a recent piece for The Atlantic, James Jeffrey defended McMaster’s logic for preventive war. Jeffrey argued that the national security adviser may possess a superior understanding of Kim’s aims. These aims, Jeffrey wrote, include the acquisition of a nuclear-tipped ICBM; the undermining of America’s security guarantees to its allies in the region; and, ultimately, the invasion and reclamation of the South. While using force against North Korea would be destructive, it may also be the “least bad” alternative to Kim’s eventual attempt at conquest, according to Jeffrey.

While no American strategist or policymaker can say with conviction that he fully grasps North Korea’s objectives, both McMaster’s logic and Jeffrey’s defense of it are riddled with holes. History and strategy indicate that McMaster’s least bad option would be an invitation to disaster.

McMaster, a voracious student, knows that the history on the Korean Peninsula since 1953 undermines his case. Since the end of the Korean War, which concluded with an armistice instead of a full peace treaty and left a large U.S. military presence in South Korea, North Korea hasn’t behaved as a benign actor. It has long held Seoul hostage with a massive conventional arsenal positioned along the demilitarized zone. It has engaged in periodic acts of aggression, like its sinking of a South Korean warship and the shelling of a small island in 2010. It also makes extravagant, pugnacious threats to its neighbors. Yet, through all that, American conventional and nuclear deterrence has largely held North Korea at bay.

Pyongyang’s retaliation against a conventional invasion by the United States would be devastating. This reality, as Jeffrey noted, has dissuaded Washington from taking that drastic step. North Korea, then, has already proven it can deter the United States. But that doesn’t necessarily negate its desire for a nuclear arsenal for defensive purposes. Indeed, North Korean interlocutors have often pointed to the U.S. invasions of Iraq and Libya to make the case that their only guarantee of security may be nuclear weapons—the ultimate deterrent.

Now that Kim has acquired nuclear weapons, a first strike by America against his regime should be a total non-starter. Yet the Trump administration has reportedly considered a “bloody nose” strike on North Korea’s military facilities to coerce Pyongyang, in hopes of punishing the regime with attacks on discrete defense facilities or platforms while blunting its military response. But it makes little sense for American war planners to assume a “limited” strike like this would stay limited. A U.S. operation may not achieve its objectives, and even if it does, it would still leave the decision of whether or not to retaliate up to Kim. The North Korean leader would make that decision based on his own beliefs about the strike once it took place, not based on American wishes for his response. If he did decide to hit back, the result could be the most calamitous U.S. conflict since World War II.

As a result, American alliances would likely suffer irreparable damage. Competitors like Russia and China would capitalize on the blunder to advance their own interests, and U.S. foreign policy would be consumed by the task of reconstruction for years. Jeffrey failed to acknowledge this horrific toll.

In addition to the ruinous human, financial, and political costs of U.S. military action against the North, it’s hard to see how Kim Jong Un could take the South and live to rule it. With America’s heavy troop presence and longstanding security guarantees with countries across the region, his expansive objectives would undermine his most central one—survival. He simply cannot take the South while holding the North.

McMaster’s logic, then, is undermined by both the history of the Korean Peninsula, as well as the military realities of invading it. Basic strategic analysis further unravels his case.

Consider McMaster’s assessment of Kim’s supposed irrationality. If Kim is irrational on matters concerning his nuclear weapons and missiles, it’s reasonable to assume he’d be similarly irrational across the board. If he cannot be stopped from trying to reunify the two Koreas, further U.S. or UN sanctions are also unlikely to alter his cost calculations. Why would a first strike by America restrain him? Irrational actors are irrational in all domains—Washington does not have the luxury of picking and choosing where deterrence prevails.

The belief that Kim can’t be deterred from conquest but can be deterred once the United States has brought force against him demonstrates a highly selective strategic understanding. What form retaliation would take, again, is up to Kim, not McMaster. Yet the national security adviser seems to hold an erratic view of strategic dynamics that conveniently supports a use of force by the United States against North Korea, and privileges this path over all other options.

McMaster and Jeffrey’s defense of him also failed to consider the message of dismissive disinterest this logic sends to America’s allies in the region. McMaster has emphasized that the threat posed by North Korea’s long-range missiles is unacceptable. But by declaring North Korea’s ICBMs—as opposed to any of Kim’s other weapons systems or behavior—to be its red line, the Trump administration is saying that it is easily deterred. Such a declaration gives Pyongyang ample notice that Washington’s extended-deterrence commitments to its allies will become less credible once Kim deploys long-range missiles, and that the United States values its homeland far more than it values its international partners. It signals that we are gravely concerned for ourselves, but that allies are no more than a passing worry.

This is a strategic choice, not a strategic inevitability—and a deeply unwise one. Consider how the United States handled a similar credibility challenge during the Cold War. After the Soviet Union acquired ICBMs, the United States managed to hold nato together without unraveling its security guarantees.

More worrisome still are the incentives McMaster’s position creates for North Korea. When the Trump administration draws the line at a North Korean ICBM but argues that Pyongyang has not yet achieved an operational capability, it implicitly tells Kim Jong Un to hurry up and complete his sprint for missiles. McMaster’s preventive logic suggests that North Korea is currently vulnerable to preventive strikes, but that once it deploys its ICBMs, the United States will be deterred, and its alliances weakened. This strategically disjointed message can only undermine U.S. alliances and energize Pyongyang.

Most of the American security community believes that North Korea wants nuclear weapons and long-range missiles to guarantee the survival of the Kim regime and to deter the United States. It does not dismiss the possibility, however, that it could misunderstand Kim’s motives, or that North Korea could have long-term reunification objectives, as Jeffrey argued and McMaster believes. No one can say for certain who is right and who is wrong about Kim’s objectives. His views might change with time.

Given the staggering costs of a U.S.-led conflict on the Korean Peninsula and the difficulties North Korea would face in trying to upend U.S. alliances to conquer the South, the Trump administration’s use of preventive force would be a suicidal reaction to uncertainty. This would not be a case of choosing the least bad option, as Jeffrey argued, but of opting knowingly for cataclysm.