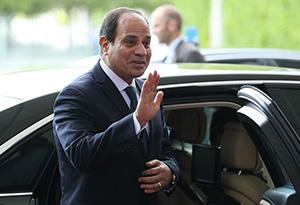 Egypt’s president, in a thinly veiled warning to critics, vowed there won’t be another uprising against the government on his watch, and that he’d be prepared to pay with his life to make sure that doesn’t happen.

Abdel-Fattah El-Sisi’s talk turned tough a day after opposition leaders called for a boycott of the March election, in which he is competing against a supporter after other candidates were disqualified or dropped out.

The price for Egypt’s security and stability “is my life and the life of the army,” he said at the inauguration of the giant Zohr gas field.

“The things that happened seven or eight years ago won’t be repeated in Egypt,” he added, referring to the 2011 popular uprising that toppled Hosni Mubarak after 29 years in power.

El-Sisi’s only opponent in the March 26-28 race is Mousa Moustafa Mousa, a little-known politician who had earlier formed a group calling for the president’s re-election. Mousa entered the race at the last minute this week, in what El-Sisi’s critics see as an act of window-dressing to prevent it from being a one-man contest.

The president, a career officer and former defense minister elected to his current office in 2014 by a landslide, says his primary commitment is to Egypt’s security and economic well-being, both battered after Mubarak’s ouster. Critics accuse him of muzzling dissent, pointing to the crackdown on Islamists that followed Mursi’s removal, which later expanded to include anti-government activists and other critics.

One of his would-be challengers in the presidential race has been arrested for allegedly inciting against the military.