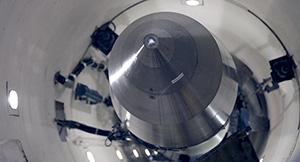 US President Donald Trump has condemned North Korea’s pursuit of nuclear missiles and promised not to repeat the mistakes of past administrations in dealing with Pyongyang. He has also called for the US nuclear arsenal to be upgraded and expanded.

Radio Sputnik discussed how worrisome Trump’s remarks regarding North Korea are with John Dunn, professor emeritus of political theory at Cambridge University, who has a long-standing interest in the politics of the Korean Peninsula.

​Sputnik: In his State of the Union address, Trump stressed that the US must revamp and modernize its nuclear arsenal, but he hopes that the US will never have to resort to it. What are your thoughts about this statement? How worrisome is it in context of the tensions between the US and North Korea?

John Dunn: It was said in relation to North Korea, and, possibly, in relation to China and Russia. This is a serious thing to say. But it was said by Trump, so you have to subtract a little in seriousness, because he is so volatile.

RS: Many people have found parallels between Trump’s speech and George W Bush’s State of the Union addresses of 2002 and 2003. What is your thought on this, do you find any parallels?

John Dunn: I don’t think that the persons involved are very similar. I think that George W Bush had a very definite policy that he was going to pursue. I think Trump doesn’t have a definite policy — he has very definite attitudes. Actually, it was really necessary for the US on many criteria to invade Iraq, but in the case of North Korea there is a real issue that Trump inherited. He committed himself before becoming president to do something about it. It’s a real issue, because it is extraordinarily difficult to anything about it — it would be absolutely disastrous. If it was quite easy to do something about it, which was going to work, it would probably have been done before, at one point or another. It’s a very long story that has been running for a very long time.

It has got to a much more dangerous point at this stage, and I think the greatest danger here is Trump’s potential response. I take it what he was doing in the State of the Union statement in relation to North Korea was to increase the level of anxiety in the Korean government in hopes that it would make them, in one way or another, more amenable in negotiations.

RS: Isn’t existing nuclear power sufficient to deter any little rocket that Kim Jong-un would be able to hurl towards the United States mainland? Why do we need to revamp the nuclear stockpiles?

John Dunn: I think it’s very unlikely that the US has serious intelligence from inside the North Korean nuclear program and you wouldn’t really be able to say anything more than what you can say already without having that. I think if they had had that, they would have done something to sabotage it, but clearly they are not in a position to sabotage it. I think this is satellite intelligence and it doesn’t tell you most of what you really need to know.

It would be crazy for the North Korea to aim their nuclear missiles at the United States. The United States land mass is very large, so probably they could hit it — but the much more important question is: where could they hit it? Obviously, they could make a strike on Washington or New York, that would be a rather different affair than if they could just aim it, you know, at the less heavily populated bits of Nevada.

RS: Wouldn’t it be logical to put forward this line: “Go ahead and develop your little weapons, because this is what we’re going to do if you are ever to use them?”

John Dunn: I think it’s very odd that the United States didn’t say exactly that two years ago. Trump has put himself in a very politically weak position domestically by the way he handled this. Because he has definitely claimed that he could stop the North Korean nuclear program before it could actually get operational. And if he hadn’t already failed to do that, he is certainly going to fail to do in next six months unless he attacks North Korea.