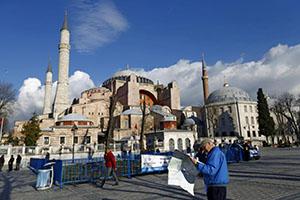 Turkey’s tourism revenue rose to $26.3 billion in 2017 with a nearly 19 percent year-on-year increase, driven by a significant rebound in the number of foreign arrivals, official data showed on Jan. 31.

While 77.4 percent of the tourism revenue (excluding GSM roaming and marina service expenditures) was obtained from foreign visitors, 22.6 percent was obtained from citizens living abroad, according to data from the Turkish Statistics Institute (TÜİK).

In 2017, the number of departing visitors increased 23.1 percent compared to the previous year and reached to 38.6 million, according to TÜİK data.

While some 83.1 percent of these visitors were foreigners (more than 32 million people), the remaining 16.9 percent were Turkish citizens living abroad.

In the last quarter of 2017, the number of departing visitors saw a 23.1 percent year-on-year increase and reached 8.3 million. While 83.2 percent was made up of foreigners, the remaining 16.8 percent were Turkish citizens living abroad, TÜİK data showed.

Amid a series of bomb attacks, a failed coup attempt and a diplomatic crisis with Russia, the number of foreign tourists visiting Turkey plummeted to 25.3 million in 2016, down from 36.2 million in the previous year. Nearly 36.8 million foreigners visited Turkey in 2014.