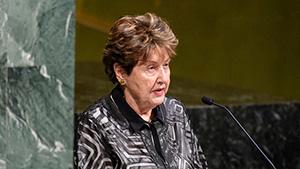 At the United Nations ceremony marking International Holocaust Remembrance Day, UN Secretary General Antonio Guterres said that, “The Holocaust did not occur in a vacuum.”

Guterres began his speech by mentioning the Holocaust survivors attending the ceremony—Thomas Buergenthal, who survived Auschwitz and Sachsenhausen and served as a judge of the International Court of Justice and as a professor at George Washington University Law School and Eva Lavi, the youngest survivor on Schindler’s List.

Guterres said, “As (former) prime minister of Portugal and UN secretary general, I feel that it has been my duty to do all I can to combat anti-Semitism. This day is about the past, but also the future. It is about Jews, but also all others who find themselves struggling with discrimination and defamation because of who they are.”

Guterres said we have two tasks: “to remember the Holocaust and its victims and to stand guard against hate today. Genocide does not occur in a vacuum.”

He added, “The Holocaust was the culmination of thousands of years of Jew hatred. It was a planned, systematic extermination and it was done with the encouragement of pseudo-scientific information and propaganda that poisoned millions of minds. Step after step the social order collapsed, a society known for its cultural accomplishments lost its moral anchor.

“The international order collapsed as well. Nations still did not manage to recover from the First World War; the League of Nations was revealed to be a failure, borders proved vulnerable to aggression,” he continued.

“And then, total tragedy—Nazi concentration camps and gas chambers in Poland, under the German occupation, killing fields in the east, known today as Holocaust by bullets. We must not forget these facts,” Guterres said.

Israeli Ambassador to the UN Danny Danon spoke at the event as well and said, “We should tell our children the unfathomable tales of that time so that such a tragedy is not repeated. We must prevent legislation that denies the truth and rewrites history. Just as we remember the brave who stood against evil and saved Jews from death, we must not forget those who collaborated with the Nazis.”

Danon denounced the UN Human Rights Report released Wednesday, “For hundreds of years, anti-Semites boycotted Jewish businesses; they forbade commerce with Jews and marked them for isolation. The report issued by the Human Rights Commission is a direct continuation of that. They join an infamous list of anti-Semites who failed in breaking the (spirit of) the Jews.”

At Danon’s request, Eva Lavi was brought in as a guest from Israel to speak at the ceremony. Lavi, 81, survived the war together with her parents thanks to Oskar Schindler, who himself convinced the Nazis that the young girl was crucial to the operations of his factory.

Lavi told her story at the podium and said, “Children our age had no childhood, we saw and heard all that the Nazis did: sadistic behavior towards infants, the elderly and the disabled, with laughter and glee on their face. The image of my young cousins being shot haunts me until today.”

Lavi said that she did not forget who saved her from the Nazi hell—God, Schindler and her mother. They were on their way to his factory when they were sent to Auschwitz, but Schindler managed to extricate them from there.

Lavi concluded, “Today I am a proud Israeli citizen, I and all of my family served in the IDF. The Holocaust must serve as a warning to us all of what can happen when racism and anti-Semitism spread throughout the world. We ought to learn to live together, we were all created equal.”