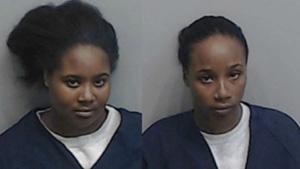 Two sisters in the US city of Atlanta have been charged over the killing of a three-year-boy whose only crime, police say, was taking a cupcake.

Police say Kejuan Mason sneaked the cupcake from the kitchen while at home with Glenndria and Lashirley Morris.

According to the indictment, Lashirley beat the child with a baseball bat while her sister Glenndria, his legal guardian, spanked him with her hand.

He died from blunt force trauma to his head and his torso, say medics.

The two sisters gave conflicting accounts of what happened on 31 October, initially claiming he had choked on the cupcake, say media reports based on police sources.

They are charged with two counts of felony murder, one count of aggravated assault and two counts of cruelty in the first-degree.

They face life in prison without parole if found guilty.

According to reports, the child’s mother had lost custody of her son when she lost her home, but she was attempting to get him back.

She had asked a judge to remove Kejuan from Glenndria’s care when she noticed he had scratches and bruises, but her request was denied three days before he died, reported the Atlanta Journal-Constitution, a newspaper in the Georgia state capital.