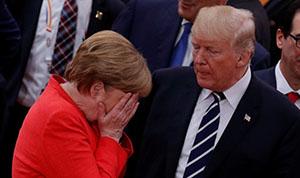 If Europeans see the Trumpian moment as an opportunity, the question is what they will do with it—and how it will affect the United States.

BRUSSELS—It’s become an article of faith that the U.S. is withdrawing from the world, and a reflex to blame Donald Trump for it. It’s also largely fictitious. Some 34,000 U.S. troops are in the Gulf, at least 14,000 in Afghanistan, 70,000 or so in North East Asia, and roughly 62,000 in Europe. Many of those numbers are growing under his presidency, alongside the list of countries in which the U.S. wages counterterrorism military operations. The picture President Trump presented in his State of the Union was not, in fairness, that of a detached America. It was of a chest-thumping America that wishes to free itself of the shackles supposedly hindering an already aggressive war on isis. It was of a miserly America that conceives of foreign assistance as a form of fee-for-service doled out to devoted allies. It was of an inconsistent America that is firmly unyielding on human rights-violations in select countries (North Korea, Iran and Cuba), and pliantly accommodating in others. And it was of a short-sighted America has little interest in or patience for diplomacy or multilateralism in pursuit of broader global goals. There are forms of U.S. disengagement far preferable to this.

Here, in Europe, the mood still veers from relative satisfaction that Trump is our creation, not theirs, to open alarm that he is their problem as much as ours. But the new U.S. posture raises a more vexing question: Europeans long have chafed under the embrace of American hyper-power, resented being relegated to the part of bankroller-in-chief, and longed for a more assertive role on the world stage. So, will Europeans see the Trumpian era as their moment? If so, what might they do with it, and how will it affect the United States?

Some initial answers are suggesting themselves already. Europe stuck to the Paris climate accord despite the U.S. retreat and—through French President Emmanuel Macron and German Chancellor Angela Merkel in particular—mounted a defense of a more tolerant, less nativist form of politics and a rules-based international order. Europe’s own internal challenges, from economic woes to the difficulties in managing migration, are far from resolved. They require European leaders to balance foreign priorities with those at home. But 2017, in some ways and with some exceptions, was the year of the dog that didn’t bark: Populists and anti-immigrants didn’t prevail in elections in France, the Netherlands, or Germany. The wave many feared was only beginning to gather force with Brexit and Trump’s election in fact appears, for now at least, to have crested with them. The space this has created has allowed for several European leaders to voice their support for norms the U.S. is in danger of discarding.

A second set of issues involves those on which U.S. policies are seen by many Europeans as jeopardizing stability and courting conflict. Exhibit A in this category is the Iran nuclear deal, or JCPOA, on which President Trump’s ultimatum—agree with us to alter the agreement or I’ll withdraw from it—is forcing Europe to grapple with how much it is willing to fight back. As Phil Gordon and I argued in these pages, a smart response would be to simultaneously encourage Washington to stick to the deal, reject any attempt to make Europe an accomplice to its breach, and prepare for a potential U.S. walkout. That means immunizing as much as possible diplomatic and economic relations between Europe and Iran from any re-imposition of U.S. secondary nuclear sanctions.

A similar dynamic is at play in the Israeli-Palestinian arena. Trump repeats the “I’ve-taken-Jerusalem-off-the-table” refrain regarding his controversial decision to recognize that city, over Palestinian objections, as the capital of Israel. He has paired this with a threat to withhold funding should Palestinian President Mahmoud Abbas ignore American desiderata. And he has thereby stripped Palestinians of whatever slender hope they still retained in a negotiated settlement, in U.S. mediation, or in the two-state solution itself. His actions have made Abbas’s task—essentially to keep alive as many illusions as possible in the eyes of a thoroughly disillusioned Palestinian populace—virtually impossible. That’s reason enough for European governments to work with the Palestinians on devising novel ways and a novel mechanism to address the Israeli-Palestinian conflict.

A common thread ties these two cases. Spurned by Washington, Iran and the Palestinians could be tempted by the allure of alternative and hazardous routes: away from the nuclear deal in one instance; toward violence in the other. There may be only so much Europe can do to firm up ties with Tehran and the Palestinians to help them resist the temptation. But they should do it.

The third category is trickiest, for it would entail Europe breaking ranks not only with the U.S., but also with some of its own habits. Over the past several years, European foreign policy has progressively defined itself more and more as an extension of domestic anxieties, chiefly concerning terrorism and migration. That’s understandable. Political leaders can ill afford to come across as divorced from public opinion and its apprehensions—however revved-up and exploited for partisan purposes. And so they must make the public’s angst at least partially their own.

But carried too far, this tendency runs the risk of producing an overly narrow and short-sighted approach. Indeed, it risks replicating some of the U.S. administration’s own policy flaws: overreliance on military force; unsavory deals with autocratic leaders who pledge to counter terrorism or stem migration; a capricious human-rights policy that spares allies while penalizing foes; a diminished role for diplomacy; and the neglect of measures to address political or social factors that drive some people to join violent groups, and some to flee their homes.

Examples of what Europe might do to counter this trend are legion. To mention a few: European leaders might use Europe’s position as Africa’s chief peace and security partner to help nudge the continent’s long-serving incumbents toward peaceful transitions of power. They might assess more critically the performance of strongmen who promise aggressive counter-terrorism military operations in the hope of external leniency toward their repressive behavior at home. They could give diplomacy a try where the U.S. approach appears to be wanting, pressing Saudi Arabia and Iran to open a channel of communication, say, or stressing the need to negotiate with the Taliban if the Afghan conflict is ever to come to an end. And they could match their criticism of rivals’ abuses—from Syrian President Bashar Assad’s use of chemical weapons to the Taliban’s horrific attacks against civilians—with a rebuke of those committed by Western allies.

Standing up to the U.S., stepping in where it opts out, devising policies with or without it: some of this inevitably will provoke Washington’s discontent or incite its ire. I should know—I served in two past U.S. administrations and other governments’ adherence to our policies always felt far more comfortable than dissent. But Europe ought to pay little heed. To forge a more independent and forceful European foreign policy focused on diplomacy and de-escalation at a time of uncertainty and confusion in Washington is not to undermine the U.S., but to do it—along with the rest of the world—a favor.