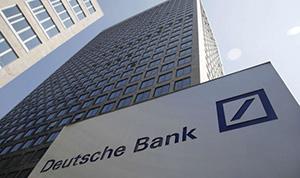 FRANKFURT: Deutsche Bank on Friday posted its third consecutive annual loss in 2017, taking a hit from challenging markets, a drop in investment bank revenue and a US tax reform.
The loss of €497 million at Germany’s flagship lender fell short of expectations of analysts, who had forecast a loss of €290 million, according to a Reuters poll of nine banks and brokerages.
The bank warned last month that it would post a loss for the year.
“We believe we are firmly on the path to producing growth and higher returns with sustained discipline on costs and risks,” Chief Executive John Cryan said in a statement. “We have made progress, but we are not yet satisfied with our results.”
The bank ended 2017 on a rough note. Revenue dropped 19 percent to €5.7 billion in the fourth quarter, while the net loss widened to €2.19 billion from €1.89 billion in the year-earlier period.
Both figures were weaker than consensus, with analysts on average forecasting €6.2 billion in revenue and a €1.95 billion loss, according to a Reuters poll.
Revenue at Deutsche Bank’s cash-cow bond-trading division dropped by 29 percent due to lower client activity in less volatile markets. Competitors have seen similar declines.