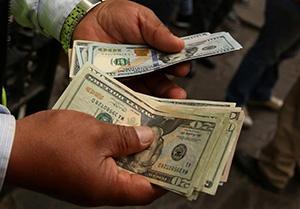 TOKYO (Reuters) – The dollar nursed losses against a basket of currencies on Friday and was on track for a weekly fall as investors focused on renewed economic strength in the eurozone.

The yen, meanwhile, largely shrugged off a special bond purchase operation by the Bank of Japan to stem the rise in Japanese bond yields which had tracked their global peers higher.

The dollar index, which tracks the greenback against a basket of six major rivals, was nearly flat on the day at 88.701 , holding above a three-year low of 88.429 set one week ago but still down 0.4 percent for the week.

The yield on benchmark 10-year U.S. Treasuries reached a high of 2.797 percent early on Friday, probing its highest levels since April 2014.

“It’s kind of counterintuitive. You’d think that with rates up, the dollar would be up, but investors are focusing their interest elsewhere,” such as further evidence that the European economy is picking up, said Jeff Kravetz, regional investment strategist at U.S. Bank Wealth Management.

Against its Japanese counterpart, the dollar was slightly higher on the day at 109.50, holding above a four-month nadir of 108.28 hit a week ago.

On Friday, the BOJ offered to buy an unlimited amount of JGBs with more than five to ten years left to maturity at 2 basis points above the previous close, which is 0.110 percent — the same level at which it has offered similar unlimited buying in the past.

The BOJ also increased the amount of its planned buying in five- to 10-year JGBs to 450 billion yen from the previous 410 billion, an amount it had kept since late August.

Foreign exchange markets were largely unfazed by the Japanese central bank’s move. The dollar drifted to its session low of 109.28 yen shortly afterward, before pushing higher.

“The BOJ’s move today didn’t have much of a forex market impact, as many market participants don’t believe the BOJ wants to further expand its balance sheet,” said Masashi Murata, currency strategist for Brown Brothers Harriman in Tokyo.

“So today’s announcement does not have much power to lift the dollar,” he said.

Later on Friday, investors will be watching the U.S. nonfarm payrolls report for January, for the latest clues on the strength of the U.S. labour market.

Nonfarm payrolls probably rose by 180,000 jobs in January after increasing 148,000 in December, according to a Reuters survey of economists. The unemployment rate is forecast to be unchanged at a 17-year low of 4.1 percent.

The U.S. Federal Reserve left its benchmark interest rate unchanged on Wednesday, though many market participants expect a rate hike in March.

The U.S. central bank has forecast three rate increases this year, the same as in 2017.