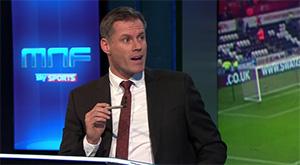 Liverpool legend Jamie Carragher has hit out at the club’s decision to cash in on Philippe Coutinho in the January transfer window, as he argued the club should have held on to the Brazilian attacking star until next summer.

Many Liverpool fans were frustrated by the club’s move to sell Coutinho mid-way through the season and make no real attempts to replace him in the final weeks of the transfer window.

Now Carragher has given his verdict on the decision, as he believes Liverpool made a big mistake to sell Coutinho to Barcelona in a £142m deal that has weakened manager Jurgen Klopp’s squad for the second half of the campaign.

“I think if you lose your best player there’s no way you can dress it up as a positive window,” stated Carragher.

“I think every Liverpool fan, when Philippe Coutinho stayed in the summer, thought ‘okay, we know he’s leaving next season. Lets enjoy this 12 months’.

“To lose him mid-season, I don’t agree with it but for that fee… Coutinho’s not worth that. He’s not that good, but I would have took £20m-£30m less in the summer to know that Liverpool would have had him for the second half of the season because at that time we were still in the FA Cup, still a Champions League to play for.”

Virgil van Dijk arrived at Liverpool as the club’s record signing after a £75m move from Southampton last month, but Independent.ie understands the Anfield club handed over that fee after initially insisting they would not meet the asking price for the Dutch defender.

Liverpool’s attitude to the move then changed in the second half of December, with Coutinho’s move to Barcelona confirmed soon after Van Dijk signed for the Anfield club.

The two deals ensured Liverpool remained in profit once for another transfer window, with some suspecting the Van Dijk deal was given the green light once Anfield chiefs knew the Coutinho windfall was imminent.