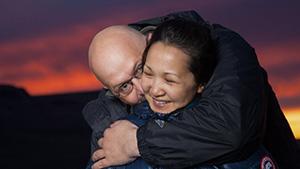 When tragedy struck, Mountie Clare Kines made a fresh start high up in the Arctic Circle. The keen photographer found an awe-inspiring landscape and an unexpected source of happiness.

Clare Kines had long dreamed of moving to the Arctic Circle. He had served in the Royal Canadian Mounted Police for two decades, but never in the extreme north.

“I had colleagues who had served up there and it was always a goal of mine,” he says.

“My wife Janice and I were talking about moving, but then she took sick.”

The couple had met in northern Manitoba province and happily moved around with Kines’ job. But in 1996 Janice was diagnosed with ovarian cancer. Months later, she passed away in his arms.

“There is not a day that her smile doesn’t pass through my thoughts,” he wrote in his diary years later.

In 1999 the widower was offered his dream promotion in Nanisivik, a mining town 700km (435miles) north of the Arctic Circle.

Going it alone, he settled in a hamlet nearby called Arctic Bay. Also known as Ikpiarjuk, the isolated town had just over 600 residents.

“In many ways it was like coming to another country,” he says.

“The main language here is Inuktitut (the language of the Inuit) so you often need translators. In summertime it’s light all the time. You can go for a walk at 2am.”

The daytime temperature was 7C when he arrived in July. However, in winter it plunged to -30C.

“We last see the sun in town on 5 November and it doesn’t come back until 6 February,” says Kines.

But Kines didn’t mind the dark season. He found it was never completely pitch black during the day but, rather, different shades of twilight.

“The light changes constantly. On a mid-morning there’s a beautiful salmon colour on the surrounding hills, turning to a blue that gets darker.”

As he processed his grief, the widower was also keeping busy with his new job.

“It was just me and a constable. We had to rely on our own resources and be jacks of all trades. If something went wrong with my truck or snow mobile I had to tinker with it,” he says.

Unemployment across the region hovers around 15%, double Canada’s average, and Kines found the area had its fair share of social problems.

The Inuit lived in the area for 4,000 years before they were encouraged to move in to towns like Arctic Bay in the 1960s. The Canadian government refused to provide social assistance to anyone living out on the land.

“Some people here resented that and it is a recognised sore spot for them,” Kines says.

Despite not speaking the local language, Kines quickly felt at home in his new community.

“Everyone was very welcoming and it was easy to get involved. I don’t know anywhere else where the whole community comes together so often to play games and dance,” he says.

About a year after Kines arrived, he found he was visiting one of the local stores more often.

“There was a beautiful woman there who often had a smile for me,” he says.

“Leah had lived in Arctic Bay her whole life. Eventually we got together to have tea.”

Kines was attracted to Leah, who is Inuit, but dating proved tricky.

“There aren’t any restaurants here and you can’t pop down to the pub or anything like that,” he says.

“So she came over to my place and we started watching movies together.”

Meanwhile, Kines was getting used to life in a severe climate. He started wearing parkas and jeans in town like local residents, despite the extreme cold. Polar gear was reserved for nights out on the ice.

He also learnt a wary respect for his new neighbours – polar bears.

“They don’t often come in to town, but a couple of guys were mauled down by the floe-edge a year ago,” he says.

Clare and Leah were growing closer. They moved in together in 2000 and were married a year later. However, he didn’t forget about his first wife.

Every year he goes for a walk on the anniversary of Janice’s death and releases wild flowers in a stream.

“Often people don’t find love at all in their lives. I’ve been very lucky to find it more than once,” Kines says.

Clare and Leah were unable to have children so decided to adopt. Kines found that custom adoption was very common among the Inuit community. This involved one family agreeing to give a child to another family to raise them.

“Our son Travis came in to our lives when he was born in 2002 and Hilary in 2006. Hilary’s mother is a close relation of my wife. Travis knows his birth mum and is in regular contact. It’s not something we hide or worry about here,” Kines says.

Both children go to Inuujuq, the only school in town. It has 240 students covering five to 18-year-olds.

The family head out on to the ice whenever they can and travel up to 10 hours over it for a fishing derby held each May.

“Getting out on the land is important here. When school ends in the beginning of June, the town pretty much empties as people head out on the land. They pick eggs, catch Arctic char and hunt seal. The land and people are part of each other,” Kines says.

He takes part in some Inuit traditions, but admits he is still learning.

“I can understand a fair amount of Inukitut as long as I know the context, but my wife and kids can effortlessly switch from one language to the other.

“My father-in-law has attempted to teach me to build an igloo and I’ve managed to get one partially up. They’re actually very cosy,” he says.

The town matriarch, Qapik Attagutsiak, is the only resident who still lives in a traditional hut heated with seal oil. People from the town take it in turns to deliver chiselled ice to her, which she melts for fresh water.

“She’s 97 now and a joy to be around. She was a traditional midwife for years,” Kines says.

A photo Kines took of Qapik was a finalist in an international photography competition.

He had been inspired by his dramatic environment to develop his hobby as a photographer.

“It’s a beautiful spot here. I walk out of my front door and I’m in nature,” he says.

A photo he took of Leah and another of the northern lights over an igloo are both now on Canadian stamps.

Some of his shots were published in local papers and one photo of an Arctic hare even made it on to the tail fin of a passenger aircraft.

The extra income photography provides Kines is modest, but welcome. After he retired from the police in 2003 he and Leah set up a bed and breakfast, but it folded after three years.

“There’s a lot of interest in the Arctic but there’s huge difficulties getting here because of the cost. A return air ticket to Ottawa would cost 7,000 Canadian Dollars ($5,600; £4,000).”

His most recent job was as an economic development officer.

“It’s very expensive to live here. There’s no road system so things have got to be flown in,” he says.

A supply vessel visits once a year in August. The family buy filling staples in the town’s store and rely a lot on country food, which they’ve caught or hunted.

Despite the hardships, Kines is in no rush to leave his adopted community.

“The culture is all about sharing. If there’s a tragedy like a house fire, people pull together and donate furniture, clothes and food,” he says.