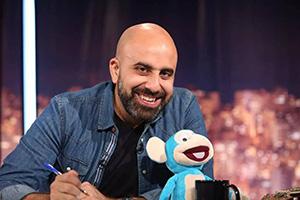 This issue sparked an outcry on social media, as this comes in the wake of a similar chain of events with political TV host Marcel Ghanem.

Aoun, which indicted Haddad upon the request of General Prosecutor Samir Hammoud, referred the case to Lebanon’s Court of Publications.

The comedian commented on Hammoud’s decision by tweeting: “This footage was intended as a joke about Michel Hayek’s predictions.” Michel Hayek is a Lebanese “clairvoyant,” mostly known for his annual predictions. He appears on TV every New Year’s eve to make predictions.

“I advise the general prosecutor not to indict Hicham Haddad if he isn’t going to indict those who insult Syria and other countries,” Wahhab tweeted.

Haddad’s indictment also sparked an outcry on social media, as this comes in the wake of a similar chain of events with political TV host Marcel Ghanem.

Ghanem was summoned for questioning on January 4, 2018, following his Kalam El Nass episode that aired on November 16.

The episode had featured a Saudi journalist, who launched a verbal attack against President Michel Aoun, Parliament Speaker Nabih Berri, Foreign Minister Gebran Bassil, and Lebanese Army Commander General Joseph Aoun, accusing them of aiding and abetting terrorism due to their ties to Hezbollah.

Hicham Haddad was expelled from the Free Patriotic Movement in August 2016, after “mocking” FPM President and Foreign Minister Gebran Bassil on his Facebook page.