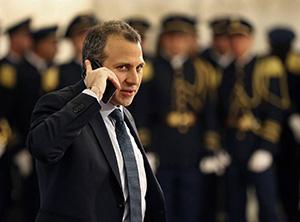 Lebanon dipped into a political crisis after a leaked video of FM Gebran Bassil calling the speaker a “thug” while addressing FPM supporters in his home district of Batroun was broadcast last week.

BEIRUT: In an effort to contain tensions that have emanated in recent days, both the Free Patriotic Movement and Amal Movement released on Thursday separate statements calling on their followers to exert restraint, highlighting the importance of maintaining the country’s stability.

“We thank all those who stood in solidarity with Speak Nabih Berri in the wake of the derogatory comments aimed at him, but we call on our supporters to refrain from streets protests,” the statement from the Amal Movement said.

In parallel, the FPM also released a statement asking their supporters to put an end to street demonstrations, as it “will have serious implications on our national stability and unity.”

President Michel Aoun sought to quash the dispute as well, phoning Berri in order to emphasize “on the importance of turning the page and working hand in hand for the sake of the country.”

Making his way out of the meeting, Hariri assured reporters that “the healthy relationship between President Aoun and Speaker Berri will be preserved, as we are all working on calming the situation.”

Meanwhile, the Lebanese Diaspora Energy Conference in Ivory Coast will go ahead as planned, according to a statement released by the Foreign Ministry on Thursday, despite calls from the Diaspora in Abidjan to postpone the conference.

“The first delegation from Beirut has already made their way to Ivory Coast to join the team from the Lebanese Embassy in Abidjan to prepare for the conference,” the statement read.

The ministry announced that delegations from across Africa reached the Ivorian capital, including representatives from businesses and banks supporting the conference.

Thursday’s statement from the ministry added that communication is ongoing with security forces to ensure all necessary measures are taken for the safety of the event.

“The ministry affirms the need for the Diaspora to dissociate itself from the internal political arguments in Lebanon, as arguments of this sort is what led to their emigration from their homeland in the first place,” the statement added.

Lebanon dipped into a political crisis after a leaked video of FM Gebran Bassil calling the speaker a “thug” while addressing FPM supporters in his home district of Batroun was broadcast by the “Al-Jadeed” TV station on Sunday.

The leaked video sparked outrage among supporters of the Amal Movement who took to the streets to denounce Bassil’s remarks, blocking roads and burning tires across Lebanon.

In the video, the foreign minister accused Berri of seeking to derail a diaspora conference in Abidjan by forcing Shiite businessmen to boycott the gathering.

Bassil, President Michel Aoun’s son-in-law, said Berri threatened to have Shiite businessmen participating in the conference fired from their jobs and the bank funding the diaspora gathering closed.