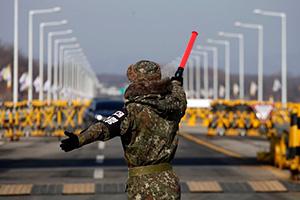 Ri Yong Ho said the United Nations shouldn’t remain silent about what he called “the U.S. dangerous game of aggravating (the) situation in and around the Korean peninsula and driving the whole world into a possible disaster of nuclear war.”

In a letter to Secretary-General Antonio Guterres circulated late Thursday, he also accused U.S. authorities of “misleading public opinion” to believe the inter-Korean dialogue is the result of U.S. sanctions and pressure.

Ri said it was North Korea’s leader Kim Jong Un who launched peace efforts on the Korean peninsula, “where a touch-and-go war danger was prevailing.”