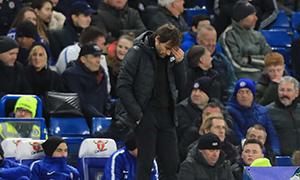 The humiliating home loss to Bournemouth provided another indication that the head coach, who has spent weeks sniping at the club’s hierarchy, will soon be gone

In the aftermath of a defeat Antonio Conte tends to drop his guard. The emotions are too raw and the Italian, consumed by that toxic blend of disappointment and frustration, lashes out and airs his troubles. Yet, as he lurched from an insistence he has been overachieving to preaching realism over Chelsea’s aspirations in the wake of a humiliating home loss to Bournemouth, it was hard not to conclude that this is a head coach pushing his relationship with his employers to breaking point.

Those up in the directors’ seats or across in Roman Abramovich’s box in the West Stand do not want to hear that the coaching staff are “exploiting this squad at the maximum level” when opponents who had started the evening two points above the relegation zone have just carved them apart at will. Or, indeed, that Conte had seen it all coming, with the buildup to the game deemed a disaster after he had built his frontline around Michy Batshuayi despite the likelihood of the Belgian departing on loan. That last comment had been delivered before kick-off but smacked of defeatism. Remind the players enough times they are underprepared, or fatigued, and they will believe it.

The tone was in effect one of I told you so. All little digs at the hierarchy designed to draw focus to the rather haphazard squad strengthening of last summer that has left options limited or the reluctance to compete with the Manchester clubs in the mid-winter window. Resources have apparently been stretched to breaking point, with Andreas Christensen’s the seventh hamstring injury of a campaign that has crammed in 40 games by the end of January (compared with 28 last term). The players’ commitment, Conte said, was not in doubt and yet it was only just dawning on them that it will be a struggle to qualify for Europe’s elite competition. The board has to recognise “that, if we are able to reach a place in the Champions League, it will be a great success”. Recent Chelsea history shows standards are set higher, realistically or not.

This was just the latest grumbling which might be considered a direct provocation of the ownership. There have been publicly aired criticisms and challenges of authority for weeks, even while the team extended their unbeaten run, if not always with victories. His suggestions that executives, including the director Marina Granovskaia, dictate recruitment over his head had hit a nerve to prompt a reminder from on high, after elimination from the Carabao Cup, that he should stop implying he had no input into transfer policy.

Conte still used his media conference before the Bournemouth fixture to claim he did not remember Emerson Palmieri from Italy. The board would argue that Palmieri and Olivier Giroud, who trained together at Cobham on Thursday while the walking wounded undertook their rehabilitation, were his recommendations. Those familiar with how Conte worked at Juventus may recognise his abrasive style. To them, last season’s relative calm was more surprising than the success he inspired.

These are unsettled times at the champions, even as the fan base still rejoice in what Conte achieved last term as well as what he has coaxed out this season. The first team had lost once in 21 domestic games before the Arsenal defeat, even if that sequence was undermined by a succession of goalless draws and Manchester City’s serene progress. Chelsea remain in the top four, have extended their participation in Europe to a knockout game against Barcelona, boast a favourable draw in the FA Cup fifth round and reached the semi-finals of the Carabao Cup. But no one is really kidded. There is an inevitability about where this is going, and the mood has long been one of private acceptance that Conte and club will part company in the summer.

Murmurings from Italy have reaffirmed as much and it would be naive to think Chelsea are not considering a succession plan. Luis Enrique’s name crops up regularly. The board’s policy through January probably reflected a state of flux. Conte wanted the deals that never materialised over the summer – Alex Sandro from Juve, Virgil van Dijk at Southampton and Alexis Sánchez at Arsenal – to be revisited. Instead, Chelsea secured Ross Barkley before moving late for Palmieri and Giroud.

Securing for £50m a 24-year-old England international and a 23-year-old Italian hopeful, players of potential who meet the club’s recruitment criteria, as well as a France forward of established reputation would appear sound business. But the younger players need time to rediscover their rhythm after bad injuries while Giroud, at 31 and on an 18-month deal, feels like a short-term fix. A far better one than Andy Carroll or Peter Crouch, admittedly, but still a forward to see Chelsea through their latest transition.

Investing more heftily would have been a louder statement of faith in Conte, who is contracted to 2019. Instead, an uncomfortable relationship has merely been maintained. At some point, maybe if Barça emulate Bournemouth, possibly if league form deteriorates to threaten a top-four finish or at the end of a campaign wearing everyone down, patience will snap. Until then, the Italian will work with what he has and hint at what he has been denied as Chelsea’s slog of a season staggers on.