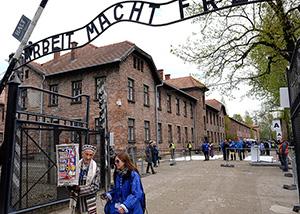 Op-ed: Is it right to turn an interpretation of history into a criminal offense? Should someone who attributes war crimes to the Polish nation go to jail? Such debates should be held in the public arena, not in court.

According to the bill approved last Friday by the lower house of the Polish parliament and by the Senate on Thursday, anyone who says the Polish nation or state were responsible for the Nazis’ crimes or collaborated with them in crimes against humanity or in war crimes would receive a fine or a prison sentence of up to three years.

The new law was met with angry reactions, many of them addressing the role played by Poles in the murder of Jews during World War II. First of all, we should briefly mention the historical facts. Since gaining independence in 1918, Poland was caught between the Russian rock and the German hard place. These two countries, which had controlled Poland in the past together with the Austro-Hungarian Empire, didn’t approve of the Polish state’s independence.

World War II broke out when the German and Soviet armies invaded Poland and divided it between them. The two occupying armies immediately began committing war crimes against the Polish population. Germans and Soviets murdered members of the Polish elite—intellectuals, army officers, government workers and religious clerics. The Germans murdered prisoners of war and enslaved forced laborers to death, executed civilians in detention camps and in concentration camps, led entire communities to death from starvation and murderously crushed any revolt attempt.

Nearly six million Poles were murdered during World War II. More than half of them were Jews—a majority of the Poland’s Jewish community. While it’s important to distinguish between the Poles and the Jews who were murdered for being Jewish rather than for being Polish, it’s wrong to deny the murdered Polish Jews of their Polishness after their death. The number of Polish nationals who were murdered, both Jews and non-Jews, was huge—about one-fifth of Poland’s citizens. The Polish nation suffered terribly during the war.

Under no circumstances should the Poles be seen collaborators of the Nazis. They were their victims. The concentration camps were built on Polish soil because that was the German-occupied place which had the biggest number of Jews, and not because it’s what the Poles wanted. Poles fought in Western armies and in the Red Army in great numbers and were responsible for one of the biggest revolts against the Germans, in 1944.

All this cannot hide the question of Poles’ attitude towards Jews during and after World War II. Poland had a Jewish minority which made up 10 percent of the country’s population. There were influential anti-Semitic movements in Poland even before the war. When the Germans threw the Jews to the dogs, many took the opportunity to kill, rob and rape without any fear—whether for ideological reasons or for utilitarian reasons (to take over Jewish property or turn in Jews in order to win a prize).

This wasn’t done by the entire Polish population. Some hid Jews or helped them in other ways. Many, the majority, watched the Jews’ fate—some shocked, some indifferent and some merry—from the side. The despicable acts of some Poles deeply scarred the Jewish survivors. The Germans were perceived as aliens; the Poles were the neighbors and former friends. They had names. They betrayal was much more painful.

The hatred of Jews continued after the Holocaust as well. It’s something I know from home, just like anyone whose parents are Polish Holocaust survivors. But we must not let those feelings, as understandable as they may be and no matter how much empathy they evoke, confuse us: There were Polish villains, just like there were villains in too many other countries, but we must not accuse the entire Polish nation of criminal acts against the Jews or of war crimes. The Polish nation was one of the victims; it wasn’t one of the initiators of the German annihilation attempt and it wasn’t even a systematic collaborator.

Is it right to turn an interpretation of history into a criminal offense? Should someone who, unlike me, attributes war crimes to the Polish nation go to jail? I don’t think so. Such debates should be held in the public arena, not in court.

This law is an attempt by the Polish Right, which rules the country, to impose its national narrative, and it will end evoking more resistance than empathy there. The Polish past should be dealt with through complete sincerity concerning the crimes committed by Poles and by distributing well-founded research correcting distortions, not through the police.