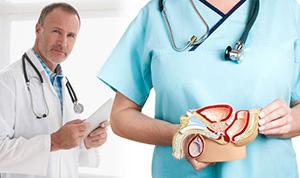 PROSTATE cancer has now overtaken breast cancer as the third biggest cancer killer in the UK, behind lung and bowel cancer. But what is the prostate, and what does it do?

A surprising 92 per cent of men don’t know what the prostate gland does, and 54 per cent don’t know where it is in their body, cancer charity Prostate Cancer UK revealed in 2016.

In fact, many men only realise they have a prostate when they receive a cancer diagnosis.

So what is the prostate, and what does it do?

The prostate gland is present in men and is the size of a walnut and sits between the bladder and the penis.

The urethra – a tube that carries urine and semen for the bladder to the penis – runs through the gland.

The prostate gland produces a thick clear fluid that is an important part of semen. It also has muscles which help men ejaculate.

The gland can become enlarged, but it doesn’t mean a man necessarily has cancer.

Prostate cancer is a malignant tumour arising from the prostate gland.

While experts are still unsure why prostate cancer develops, there are a number of things which can increase the risk of developing the disease.

Men who have have a brother or father with prostate cancer, or a family history of history of the disease are at increased risk.

The disease is also more common in men of African-Caribbean or African descent.

The disease is usually diagnosed in patients aged 50 or above. Some men don’t get any symptoms at all, while some men have problems urinary symptoms or even back ache.

The cancer is diagnosed by a PSA reading. PSA stands for Prostate Specific Antigen and is one of the main tools used to assess the risk of prostate cancer.

PSA is a protein produced by the prostate and released into the blood stream in very small quantities.

More PSA is released when there is a problem with the prostate, and elevated levels can signal issues like prostatitis, enlarged prostate or prostate cancer.

There is no screening test for prostate cancer because of the reliability of the PSA test, but men over fifty can ask for one, Cancer Research UK said.