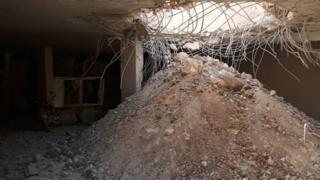 A hospital built under 20m (60 feet) of rock in a rebel-held part of central Syria has been wrecked by a powerful air strike, medical sources say.

They say the hospital in Hama province – regarded as one of the best protected in the country – was put out of service by Thursday’s strike.

No casualties are reported but aid workers say it is the worst in a wave of attacks against hospitals in Syria.

Meanwhile the UN says aid is no longer getting through to besieged areas.

The Al Maghara cave hospital in the town of Kafr Zita was hit by five missiles in Thursday’s strike, says the Union of Medical Care and Relief Organizations (UOSSM), an international coalition of medical charities.

“It’s widely believed to be the most secure hospital in Syria,” UOSSM spokesman Avi D’Souza told the BBC.

Image caption Damage to the facility appeared to be extensive

Mr D’Souza said the reason there were no deaths seemed to be that staff and patients were evacuated to a safe room when they heard incoming jets.

The group says the facility – which serves a population of 50,000 people and performs about 150 major surgery procedures a month – suffered extensive damage.

Causing such damage is only possible through advanced weapons, such as bunker-buster missiles, the UOSSM added.

“This is the most serious attack in a larger campaign against hospitals,” Mr D’Souza said.

The group recorded 14 strikes against medical facilities in Syria in January alone.

It is not clear who carried out the latest strike, but Syrian government warplanes or those of its ally Russia have been stepping up attacks in rebel-held areas.

Both Syria and Russia have consistently denied targeting civilians.

Also on Thursday, the United Nations’ Humanitarian Co-ordinator for Syria warned that diplomatic efforts to get aid into the country had become “totally impotent”.

“The last convoy to a besieged area was at the end of November,” said Jan Egeland. “We need an end to the fighting and we need to have Russia, Turkey and Iran again get de-escalation.”

Conditions are at their worst since 2015, he said. Aid convoys must be approved by the Syrian government and armed groups have to offer security guarantees.

As Syrian government and Russian forces have continued to pound rebel targets, Turkey last month launched a ground operation against Kurdish militia – which it regards as terrorists – in northern Syria.

The Kurdish group targeted – the YPG – is active in the Afrin region across from Turkey’s border.

The militia forms a crucial part of a US-backed alliance battling Islamic State (IS) jihadists in Syria.