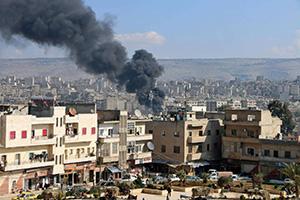 Syrian troops and allied militia forces moved within 14 kilometers (9 miles) of the town of Saraqeb, in Idlib, the opposition’s largest stronghold in the country, a war monitoring group reported.

BEIRUT: Syrian government forces pushed into an opposition stronghold on Thursday, as rebels aligned with Turkey battled with Kurdish militants in a nearby area.

Syrian troops and allied militia forces moved within 14 kilometers (9 miles) of the town of Saraqeb, in Idlib, the opposition’s largest stronghold in the country, a war monitoring group reported.

Syria’s military leveraged its monopoly on air power to carve a path deep inside Idlib to reach the Abu Dhuhour airbase, 26 kilometers (16 miles) southeast of Saraqeb, last month. It then started marching toward Saraqeb, an important military center for rebels and al-Qaida-linked insurgents in control of Idlib.

The opposition has limited anti-aircraft capabilities.

Turkey has mobilized some 10,000 Syrian opposition fighters to fight in its campaign against a Kurdish militant group approximately 50 kilometers (31 miles) to the north.

That campaign, codenamed Operation Olive Branch, has drawn protest from the U.S. and France, who consider the Kurds an ally in the war on the Islamic State group.

Turkey considers the Kurdish People’s Protection Units – or YPG – to be an extension of a Kurdish insurgency inside Turkey and views the group at its borders as a national security threat.

Ankara took umbrage at remarks by French President Emmanuel Macron, who warned against an “invasion operation.”

Turkish Foreign Minister Mevlut Cavusoglu called the warning an “insult” and said Thursday that France was in no position to “teach a lesson” to Turkey over its cross-border offensive, referring to past French military interventions in Algeria and other parts of Africa.

Cavusoglu said France understood that Turkey was fighting “terrorists” and did not aim to invade Afrin.

Some 15,000 civilians have been driven by the joint Turkish-Syrian opposition campaign in the Kurdish-controlled city of Afrin, according to U.N. humanitarian adviser Jan Egeland. The figure could not be independently verified.

Egeland spoke Thursday to reporters in Geneva after a regular meeting of world and regional powers in a U.N. humanitarian “task force” for Syria.

Booby traps and mines planted by the Islamic State group in Raqqa have killed or wounded an average 50 people per week since U.S.-backed fighters – including the YPG – expelled the jihadist group from the city in October, Egeland said.

“There are explosives all over civilian areas,” Egeland said, adding that residents were returning to the city too quickly for demining operations to keep pace.

He also said that aid deliveries to “besieged areas” in Syria have fallen to their lowest level since 2015 — before the task force was created — with no access to them at all for the last two months.

Also on Thursday, the opposition’s Higher Negotiations Committee said it was ready to back a Russian-brokered constitutional reform initiative for Syria, so long as it’s lead by the United Nations.

Any constitutional committee must be formed at the U.N., and include representation from the HNC, which represents the Syrian opposition in U.N. talks with the government in Geneva, said HNC chief Nasr al-Hariri.

He spoke in Istanbul at a press conference on Thursday, two days after Russia convened its Syria Congress for National Dialogue in Sochi. The HNC boycotted the Congress, saying it would not lead to peace. Russia is a key ally of the Syrian government.

Deciding the committee’s makeup could doom the initiative before it even takes wing. Syrian state media, a government mouthpiece, says Damascus will have two-thirds of the representation on the committee.

Hariri said the HNC would not accept having a committee appointed at Sochi.