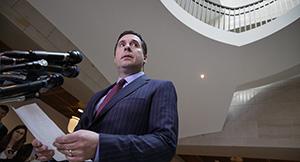 “It has now come to our attention that Congressman Nunes deliberately and materially altered the contents of the memo since it was voted on by the House Republicans,” Pelosi said in a letter to Speaker Paul Ryan. “This action is not only dangerous, it is illegitimate, and violates House rules… Congressman Nunes’ deliberately dishonest actions make him unfit to serve as Chairman, and he must be removed immediately from this position.”

​Pelosi said Nunes abused his position as chairman of the House intelligence committee by launching a cover-up campaign for the White House to discredit investigations into the Trump-Russia scandal.

Schumer in a separate letter called on the House Speaker to remove Nunes and back swift passage of legislation to protect Special Counsel Robert Mueller’s probe into Trump’s alleged ties to Russia.

It’s clear Rep. Devin Nunes and House GOP will stop at nothing to impede Meuller’s Russia probe and undermine the rule of law – all as a means of protecting President Trump. 1/4 pic.twitter.com/8hrIf6feYX

Meanwhile, a White House official told reporters that US President Donald Trump has read the memo from Republicans on the House Intelligence Committee regarding FBI abuses of surveillance.

Nunes said in a statement on Wednesday that it is clear top FBI and Justice Department officials used the unverified information to keep a counter-intelligence investigation going during the campaign.

On Monday, the House Intelligence Committee voted to release the four-page memo which alleges Justice Department and FBI high-level officials misused power in relation to surveillance of Trump’s presidential campaign.

Russia has repeatedly denied allegations that it meddled in US politics, including accusations that it interfered in the 2016 US election.