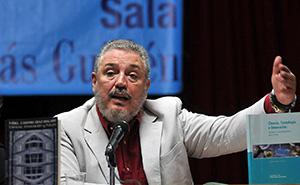 The oldest son of deceased Cuban leader Fidel Castro committed suicide on Thursday morning after months of being under depression treatment, according to state media and reported by Associated Press.

Fidel Castro Diaz Balart, 68, had been in a deep depressive condition, local website Cubadebate indicated. He was being assisted by a group of doctors and his treatment “required a hospitalization regime then outpatient follow-up,” according to local reports.

The announcement reportedly stunned Cubans on the island, where the press rarely provide detailed information about death causes, especially when it comes to suicide cases, according to BBC Mundo.

Castro Díaz-Balart was known as “Fidelito” or “Little Fidel,” because he had a resemblance to his father and donned a similar beard. He was born in 1949 and became the only son of Fidel Castro and Mirta Díaz Balart’s brief marriage. After their divorce, Mirta Díaz Balart did not get custody of “Fidelito.”

He graduated from the Institute of Science and Nuclear Technology in the former Soviet Union, and he once spearheaded the development of the Juraguá Nuclear Power Plant, according to BBC Mundo. However, its construction was suspended in 1992 following the collapse of the Soviet Union and the termination of Moscow’s financial aid to Havana.

Castro Díaz-Balart never assumed a political post under the Castro regime. At the time of his demise, he was the vice president of the island’s Science Academy and also served as scientific advisor for the Council State. “During his professional activity, entirely dedicated to science, he earned international and national recognition,” Cubadebate added.

Castro Díaz Balart was the cousin of Mario Díaz-Balart—a Republican Representative from Florida who is a staunch critic of the Castro regime—as well as former Congressman Lincoln Díaz-Balart and Telemundo anchorman José Díaz-Balart.