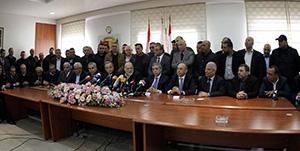 BEIRUT: In the lead up to the 12th anniversary of the signing of the Memorandum of Understanding between Hezbollah and President Michel Aoun, the Free Patriotic Movement (FPM), Speaker Nabih Berri’s Amal Movement, and Hezbollah came together on Friday to ease tensions that had built up over the past few days.

George Aoun, mayor of the Municipality of Hadath, opened up the event, saying that “what happened is now a thing of the past,” adding that “Lebanon is the country of coexistence.”

Meanwhile, Ammar praised president Aoun’s “patriotism” and efforts to preserve Lebanon’s “dignity and sovereignty,” before highlighting that “both and Aoun and Hassan Nasrallah are keen to preserve our internal unity.”

In his speech, Bazzi struck a conciliatory tone as well, asserting that the violence witnessed in the streets of Beirut and Hadath precisely “had nothing to do with the Amal movement,” before apologizing on behalf of Berri to all Lebanese affected by this disruption.

At the conclusion of the meeting, all three men were pictured holding hands, in a sign of solidarity and unity.

In the wake of Bassil’s leaked video, supporters of Amal movement entered the town before being confronted by supporters of the FPM, with shots being fired in the air as the Lebanese Army made its way in in order to appease the situation. It is unclear who fired the shots.

The controversial video sparked outrage among Amal movement supporters who took to the streets accusing Bassil of disrespecting their leader Berri.