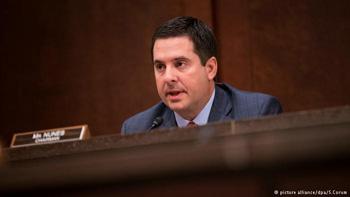 Trump has allowed the release of the memo, which Democrats say is a crude attempt to undermine Mueller’s Trump-Russia investigation

Republicans on Friday released a controversial memo that alleges an abuse of power by the FBI in its investigation into Russian meddling in the 2016 election, after Donald Trump declassified the document and accused top officials of bias.

The House intelligence committee chairman, Devin Nunes, published the memo minutes after the president’s approval, despite a warning from the Department of Justice that it would be a “reckless” act. Democrats have portrayed the memo as a crude attempt to undermine the credibility of the Robert Mueller investigation into possible collusion between the Kremlin and members of the Trump campaign.

The four-page memo, released with a letter from the White House, alleges that the FBI omitted key information when it applied for a wiretap on an adviser of Trump’s campaign. The findings “raise concerns with the legitimacy and legality of certain DOJ and FBI interactions” with the court that approves surveillance requests, the memo says. It also claims they “represent a troubling breakdown of legal processes established to protect the American people from abuses”.

The memo’s central claim is that the FBI omitted context in its application to surveil the Trump adviser, Carter Page. The document notes that the FBI used material compiled by former British spy Christopher Steele, whose work was funded by Democrats, and who the memo says was “desperate that Donald Trump not get elected and was passionate about him not being president”.

The memo also claims that the FBI “terminated” Steele as a source because he spoke with the media, and that texts between an FBI agent and FBI attorney “demonstrated a clear bias against Trump”. The agent was removed from the investigation in December.

The release follows a week of partisan rancor over the memo in Washington, and Democrats and former law enforcement officials swiftly condemned the declassification, joined by at least one senior Republican senator, John McCain.

“The latest attacks on the FBI and Department of Justice serve no American interests – no party’s, no president’s, only Putin’s,” McCain said on Friday.

In a rare statement, the FBI Agents Association mounted a defense of the rank-and-file agents it represents. “The men and women of the FBI put their lives on the line every day,” the association said, “because of their dedication to tour country and the constitution.”

“FBI special agents have not, and will not, allow partisan politics to distract us from our solemn commitment to our mission,” it added.

For weeks, Democrats have said the memo cherry-picks classified intelligence to cast Rod Rosenstein, the deputy attorney general, as a villain in an FBI plot to surveil Page.

What is the Nunes memo?

Rosenstein has oversight of the special counsel investigation, and his removal would pass that oversight to another person, threatening to close or cripple the investigation.

Early on Friday morning, Trump disparaged leaders of the FBI and justice department in a tweet, accusing them of partisan bias. He later spoke to reporters, telling them, “a lot of people should be ashamed of themselves”.

Asked whether he still had confidence in Rosenstein, he said: “You figure that one out.”

In a letter, the White House counsel, Don McGahn, acknowledged “extraordinary” circumstances around the memo, and said that the president can declassify information “when the public interest in disclosure outweighs any need to protect the information”.

“To be clear,” he added, the memo “reflects the judgments of its congressional authors”.

Adam Schiff, the leading Democrat on the House intelligence committee, said the memo’s “sole purpose” was “to circle the wagons around the White House and insulate the president.

“Tellingly, when asked whether the Republican staff who wrote the memo had coordinated its drafting with the White House, the chairman refused to answer,” Schiff said.

On Friday, Nunes said he had not actually read the underlying materials referenced in a memo he and other Republicans on the panel assembled. Nunes told Fox News the committee arranged with the Justice Department for a limited number of people to read the documents. “I thought the best person on our committee was the chairman of the oversight committee, Trey Gowdy, who has a long career as a federal prosecutor, to go and do this. And then they, over a series of meetings, would come back and brief us, the committee members,” Nunes said.

Democrats have drafted a memo to compete with the Nunes memo, the details of which are unknown. They also have asked social media companies to identify any Russia-linked actors behind a viral campaign taken up by the Republican grassroots to #ReleasetheMemo. Democrats have noted that Page was known to the FBI since at least 2013, for instance, when Russian spies courted him in New York, and that Australian officials tipped off the FBI to another campaign adviser who knew of Russian hacks.

The memo itself notes that information about this second adviser, George Papadopoulos, “triggered the opening of an FBI counterintelligence investigation in late July 2016”.

The memo also contained material that was deemed classified, meaning the president’s consent was required for its release. For days, law enforcement officials objected to its release, but Trump was overheard on Tuesday, leaving his state of the union address, telling a lawmaker he “100%” supported the memo’s release.

That he overruled the FBI’s concerns has raised fears he means to undermine the bureau’s work. “I’ve read both memos,” Democratic representative Ruben Gallego tweeted Thursday. “What’s clear to me is that the sole intent of the #NunesMemo is to give the Trump administration cover to fire Rosenstein.”

Earlier this week the FBI had strongly discouraged publication of the memo, saying it had “grave concerns” about its accuracy. The FBI director, Christopher Wray, brushed back suggestions that he would resign, however.

While many House Republicans have supported Nunes or refused to comment on his actions, McCain quickly moved to support career law enforcement officials.

“The American people deserve to know all of the facts surrounding Russia’s ongoing efforts to subvert our democracy, which is why special counsel Mueller’s investigation must proceed unimpeded,” he said. “Our nation’s elected officials, including the president, must stop looking at this investigation through the warped lens of politics and manufacturing partisan sideshows.”

James Comey, the former FBI director who was fired by Trump last year, reacted to the memo with incredulity. “That’s it?” he asked on Twitter. “Dishonest and misleading memo wrecked the House intel committee, destroyed trust with intelligence community, damaged relationship with Fisa court, and inexcusably exposed classified investigation of an American citizen. For what? DOJ & FBI must keep doing their jobs.”