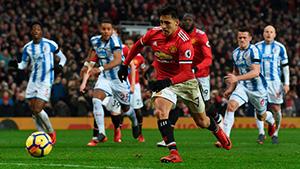 A round-up of the action in the Premier League, where Manchester City dropped points on a day which saw the Soccer Saturday Price Boost land.

The online firm enhanced the odds of United, Bournemouth and Derby all winning to 6/1 and it was only the Cherries who gave cause for alarm, as they fought back to beat Stoke 2-1.

Leaders Manchester City had earlier been held to a 1-1 draw at Burnley but, despite United’s victory, are still 13 points clear.

Romelu Lukaku made the breakthrough on 55 minutes with a close-range finish before Sanchez – who joined the Red Devils from Arsenal ahead of the transfer deadline in a swap deal for Henrikh Mkhitaryan – doubled the lead on 68 minutes.

The Chile forward saw his penalty saved by Jonas Lossl but was alert to knock in the rebound.

On another day, Arsenal may have been made to miss their former star man but that certainly wasn’t the case as they thrashed Everton 5-1.

The Gunners were as outstanding as Everton were poor in the first half, although Pierre-Emerick Aubameyang was offside when he scored Arsenal’s fourth just before the break.

Aaron Ramsey had given Arsenal the lead thanks to a pass from Henrikh Mkhitaryan, Laurent Koscielny bundled home a second before Ramsey’s deflected strike ended the game as a contest inside 20 minutes.

Everton were a different animal in the second half and deserved the goal that Dominic Calvert-Lewin gave them, before Mkhitaryan again set up Ramsey as the Welshman bagged a hat-trick.

In Saturday’s lunchtime kick-off, City had been made to pay for not taking their chances at Turf Moor.

Defender Danilo gave Pep Guardiola’s side the lead with a fine 20-yard effort on 22 minutes.

Raheem Sterling, though, missed from close range and Burnley responded to secure a point when Johann Berg Gudmundsson equalised with eight minutes left.

Southampton dragged themselves out of the relegation zone with a 3-2 win at bottom club West Brom.

The Saints were level on 40 minutes through a 20-yard strike from Mario Lemina and went in front just before half-time when Jack Stephens headed in.

James Ward-Prowse added a third on 55 minutes with a curling free-kick and Salomon Rondon’s goal was mere consolation.

Brighton boosted their hopes of staying clear of the relegation scrap with a 3-1 home win over West Ham.

Glenn Murray put the hosts ahead on eight minutes but the Hammers were level on the half-hour through a well-taken goal by Mexico forward Javier Hernandez.

Winger Jose Izquierdo lashed in a superb angled strike on 61 minutes to put Brighton back in front, with Pascal Gross drilling home a third after 75 minutes.

Bournemouth continued their good form with a couple of late goals to beat Stoke 2-1 at home.

The Cherries, who won 3-0 at Chelsea in midweek, had to come from behind after Stoke took the lead after just five minutes through Xherdan Shaqiri’s header.

With 20 minutes left, Joshua King equalised, and on 79 minutes substitute Lys Mousset headed in Jordon Ibe’s free-kick at the back post to secure all three points and complete the winning Price Boost treble, after wins for Manchester United and Championship side Derby.

Leicester and Swansea drew 1-1 at the King Power Stadium.

The Foxes were again without forward Riyad Mahrez, who had missed training in the wake of a deadline-day move to Manchester City falling through.

Jamie Vardy gave Leicester the lead on 17 minutes and Swansea lost midifleder Leroy Fer to what looked a serious ankle injury after 34 minutes.

But the visitors, who had beaten both Liverpool and Arsenal to boost their survival hopes, equalised on 53 minutes through Federico Fernandez’s header.