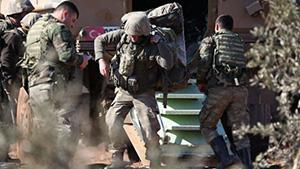 The Turkish military has suffered the deadliest day in its offensive against Kurdish militias inside northern Syria, with seven soldiers killed.

Five of the troops died when their tank was attacked in the Afrin region.

PM Binali Yildirim vowed to make the militias “pay for this twice as much” and jets later struck Kurdish targets north-east of the city of Afrin.

Turkey’s “Olive Branch” operation was launched on 20 January to drive the Kurdish YPG militia out of Afrin.

Turkey views the YPG (People’s Protection Units) as a terrorist group and an extension of the banned Kurdistan Workers’ Party (PKK), which has fought for Kurdish autonomy in south-eastern Turkey for three decades.

What does Turkey say happened?

The military said in a statement that the US-backed YPG attacked the tank in Sheikh Haruz, north-east of Afrin city.

Two other soldiers were killed earlier, the military said, one in Afrin and another on the Turkish side of the border in an attack blamed on the YPG.

Turkey has now lost 14 soldiers in fierce clashes during the offensive.

What is the operation about?

Mr Yildirim reiterated on Saturday that the aim of operation “Olive Branch” was to eradicate what he called “a terror belt” along Turkey’s borders.

“It is an operation aimed at liberating Arabs, and our Kurdish and Turkmen brothers who have been groaning under oppression,” he told members of the governing Justice and Development Party (AKP).

Turkish troops are being accompanied by pro-Turkey rebels from the Free Syrian Army (FSA).

President Recep Tayyip Erdogan said on Saturday that the Turkish-led forces were taking high ground and would now head towards the city of Afrin itself, saying: “There is not much [further] to go.”

Turkey says it has killed some 900 Kurdish fighters, but this cannot be independently verified.

What do Kurdish reports say?

Thousands of people have been displaced by the Turkish-led offensive that also involves about 10,000 Syrian rebels.

A Syrian Kurdish health official said on Saturday that 150 civilians had been killed and 300 wounded since the start of the Turkish operation, but this also cannot be independently verified.

She urged international monitors to “come here and see the situation for themselves”.

What has been the international reaction?

Western powers, including the US and France, are urging restraint.

Thousands of Kurds protested outside the Council of Europe in Strasbourg on Saturday against the offensive.

They carried banners reading “Erdogan assassin” and “defend Afrin”, and shouted slogans such as “silence kills” outside the Council of Europe offices.

One protester, Suleyman Akguc, told Agence France-Presse: “We want to sound the alarm because the Kurds in Afrin have fought against the Islamic State and are being massacred today. The silence of the European leaders is deadly.”

A similar protest was held in Paris, with about 2,000 protesters marching from the Gare de l’Est towards the Place de la Republique.

President Erdogan sought to reassure his French counterpart Emmanuel Macron on Saturday that Turkey was not trying to seize territory in northern Syria.

In a phone call, he told Mr Macron that Turkey had “no eye on the territory of another country” and that the operation was “aimed at purging” Afrin of “terror elements”, the state-run Anadolu news agency reported.

Mr Macron riled Turkish leaders last week when he said in a newspaper interview that France would have a “real problem” if Turkey was engaged in an “invasion operation”.

A government official denied the accusation, saying Turkey had an “open-door policy”.

Turkey has taken more Syrian refugees than any other nation.