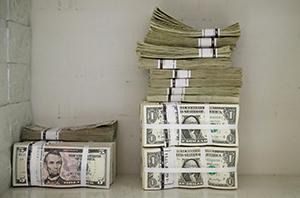 TOKYO (Reuters) – The dollar steadied on Monday after rallying on upbeat U.S. jobs data, which sent bond yields surging on the prospects of increasing inflation and hammered equities.

The dollar index against a basket of six major currencies stood little changed at 89.127 after gaining 0.6 percent on Friday, when the U.S. payrolls report showed wages growing at their fastest pace in more than 8-1/2 years and fuelling inflation expectations.

Futures markets reacted by pricing in the risk of three, or even more, rate rises from the Federal Reserve this year.

The jobs report provided a welcome relief for the greenback, which had slipped to a three-year low of 88.438 late in January on a range of factors including concerns about U.S. trade protectionism and perceptions of narrowing yield advantage.

The U.S. currency dipped 0.25 percent to 109.925 yen as Friday’s Wall Street losses spilled over into Asia. The yen tends to benefit during times of risk aversion thanks to its perceived status as a safe haven.

The dollar, which had fallen to a four-month low of 108.280 on Jan. 26, rose to a high of 110.485 yen on Friday. It pulled back later as the specter of inflation knocked Wall Street shares lower.

“Although stock market weakness is weighing on the dollar against the yen, the tide appears to have turned for the currency after the U.S. jobs report,” said Yukio Ishizuki, senior currency strategist at Daiwa Securities in Tokyo.

“Speculators had gone excessively long on the yen, perhaps on misguided expectations towards Bank of Japan policy. But the U.S.-Japan yield differential is now too wide to be ignored.” Ishizuki said.

With benchmark Treasury yields reaching four-year highs after the jobs report, the U.S.-Japan 10-year yield spread stretched to its widest since late 2007.

The dollar had sunk sharply against the yen when the BOJ trimmed the amount of Japanese government bonds (JGBs) it bought at a regular debt-purchasing operation early in January, which some market participants took as signal that the central bank was readying from an exit from its easy monetary policy.

Near-term focus was on the German coalition talks set to continue later on Monday after Chancellor Angela Merkel’s conservatives and the Social Democrats (SPD) failed to conclude negotiations in time to meet a self-imposed Sunday deadline.

“The euro, along with the Australian dollar, the pound and some emerging market currencies, had enjoyed rich gains this year and perhaps reached unreasonable price levels,” said Masashi Murata, senior strategist at Brown Brothers Harriman in Tokyo.

“So we are seeing some of those gains being corrected. Everyone knows the dollar has been on a shaky footing, but the euro at $1.25, the pound at $1.43 and the Aussie at $0.8000 looked overdone,” Murata said.