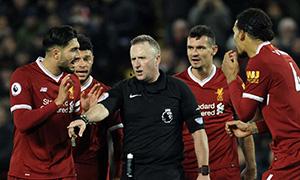 Jürgen Klopp said he would be hit with “the biggest fine in world football” for his true thoughts on Tottenham Hotspur’s dramatic late equaliser at Anfield but insisted the match officials cost Liverpool a crucial victory in their pursuit of Champions League qualification.

Harry Kane equalised with a 95th-minute penalty against Liverpool – his 100th Premier League goal – after the assistant referee Edward Smart penalised Virgil van Dijk for a kick on the Spurs substitute Érik Lamela.

Jon Moss had waved play on before Smart’s intervention and had also consulted the assistant over another penalty for the visitors 10 minutes earlier. That spot-kick was missed by Kane, who was offside when Dele Alli played the ball forwards via a deflection off Dejan Lovren.

The Liverpool manager claimed both decisions were poor mistakes that overshadowed another stunning display by Mohamed Salah.

The Egypt international struck his 20th and 21st league goals of the campaign, the second in the 91st minute, becoming the quickest Liverpool player to reach that total in the Premier League era while van Dijk accused Kane of diving and denied he had fouled Lamela.

“It’s not a penalty,” Klopp said. “I’ve heard Lamela was offside with one leg, running into Virgil van Dijk. Virgil sees him at the last moment, stops the movement but still touches him. Lamela is already on the way down. The referee says keep on going and the linesman makes the decision. That’s what everybody saw.

“It was obviously not his day. The first penalty, it was one of the clearest offside situations I have seen. Unless there’s a new rule. Is there? When the ball left the foot of the Tottenham player, Harry Kane is offside. This situation has never changed. Dejan touched it. My defence put Kane offside, that’s good defending. I don’t know what they discussed this time, I would be really interested what the referee and assistant were saying.”

Alli was booked for diving in the second half and Klopp claimed Spurs were “wanting to go down”. He added: “It was not a dive of Lamela. He jumped in the situation, he wanted the contact. He didn’t look back in the situation; he didn’t even look at the ball.

“I am angry but I can’t change anything. What’s my job now – to create headlines? To be punished? To pay a fine? If I say what I think, I would pay the biggest fine in world football. That makes absolutely no sense. I have no problem with people making mistakes but, if you don’t see the situation, step aside. At the end I’ve learned something new and now people will think I know nothing about football because I thought it was offside. But the second one, it’s not about who is where. In the 93rd minute you whistle a penalty when you are 100% sure. There were no other incidents in the box apart from the Alli situation. It’s clear in these situations the opposition wants to go down, wants to cause these type of problems.”

Mauricio Pochettino congratulated Moss on his performance, saying the match officials “were right in every single decision. Sometimes you complain but, when they are right and show character, I think it is important to recognise and congratulate them, because they have a difficult job.”

As for Kane’s century of league goals, arriving in such dramatic fashion, the Spurs manager said: “He is one of the best strikers and he was calm. He can miss a penalty or a chance but, if you have the personality to score 100 Premier League goals, it is because you have big, big balls.”

Van Dijk, Liverpool’s £75m record signing, said Kane had “clearly” dived for the first penalty. “I don’t think it was right because the first one was offside and second he just put his body in front of me. I don’t think that is a pen and the same with the first one. That is also clearly not a penalty. I think it is a dive. You see him [Kane] diving clearly and no one is talking about that. But I think it is a dive.”

Of the Lamela penalty he said: “I see him coming and I try and hold my leg in, he just pulled his body in front of the ball and he goes down. The ref said play on and I was very disappointed that the linesman said otherwise.”