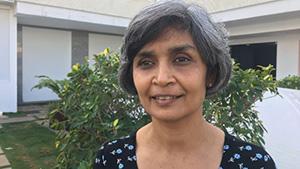 New Delhi: One Indian woman who was abused as a child, and her inability to forget what happened 47 years ago, has forced the Indian government rethink the law on sexual abuse.

Under the law as it stands, an adult survivor of sex abuse cannot report a crime. But after meeting Purnima Govindarajulu, a 53 year old conservation biologist who grew up in India but lives in Victoria, Canada, the minister of Women and Child Welfare, Maneka Gandhi, said last week that the law needs to be changed.

Govindarajalu met Gandhi on a recent visit to India because the purpose of her visit – to report the male relative who had abused her – had been thwarted. Mrs Gandhi was prompted to order the review after meeting.

When Govindarajalu had told Chennai police that she wanted to report the crime, they said there was no specific provision under the law which allowed them to file a report on a crime committed so long ago.

“I was six years old when I was first sexually abused by a cousin’s husband. My family was financially weak and my mother was very sick. [The other family] were wealthy, their daughter was only a few years younger and so I was often sent to stay at their house.

“It got worse when I was 10 to 13 years old, especially at night … I blocked out much of the details. It wasn’t until the age of 23, after I had moved to Canada in the wake of my father’s death, that I realised what happened to me was child sexual abuse,” she told the Indian Express.

The language in the current law, passed in 2012, is ambiguous in that it talks about a child reporting an offence as “aged under 18”, so while there is no explicit prohibition against an adult survivor filing a criminal complaint, the police are confused and unwilling to act.

A survey last year by World Vision India revealed that one in every two children in the 12 to 18 age group is a victim of child sexual abuse. Other surveys have thrown up the same figure, prompting experts to call it a “silent epidemic”.

The culprits are usually male relatives or trusted family friends. The man whom Govindarajulu accuses of abusing her is her cousin’s husband, who still lives in Chennai. And in a case that occurred just a few days before Mrs Gandhi ordered a review, an eight month old baby was raped in the Indian capital allegedly by her father’s nephew.

Cultural factors in India make abuse easier and speaking out more difficult. There is a taboo about talking about sex and sexuality; entrenched patriarchy and misogyny in large parts of society; a belief inculcated in children that elders are right and must be respected and obeyed; and the stigmatisation of victims and their families by their entire social circle.

If children often do not speak out, it’s because of fear of catastrophic consequences, including the breakup of the family and being ostracised. Govindarajulu says her family’s reaction has been mixed.

However, lately several Bollywood stars have come out to reveal that they were sexually abused as children, suggesting that the wall of silence around it may be cracking.

Pooja Taparia, founder of Mumbai-based Arpan, an NGO that counsels children who have suffered sexual abuse, welcomed the review of the law. She says that survivors can take 10, 20 or 30 years just to admit to themselves that they were abused and take years to confide in a trusted friend, let alone go to the police to report it.

“Since the purpose of the law is to punish offenders, survivors who have finally worked up the courage to speak about it and take action about it, should be able to have recourse to the law, whenever that is,” she said.

Govindarajulu welcomed the government’s decision to re-examine the law. Not, she added, because she was seeking justice. That was only part of it.

“The bigger reason is that these people are repeat offenders. They won’t stop. It’s only if adult survivors can go to the police and take action against them that they will stop. Only then will be there be a deterrent,” she said.