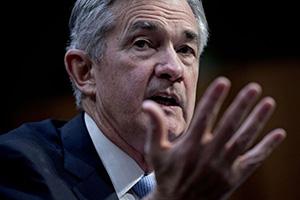 It’s been a long time since an incoming Federal Reserve leader had it this good.

Jerome Powell will be sworn in Monday morning as the 16th chairman of the Fed, on the day after his 65th birthday. He’s inheriting a U.S. economy in its third-longest expansion on record, with unemployment and inflation near historically low levels.

“Global growth feels more powerfully coordinated than it has in a long time and inflation remains low,” said Carl Tannenbaum, chief economist at Northern Trust Corp. and a former Chicago Fed staffer. “Some view inflation as a problem, but I remember when this was referred to as Goldilocks conditions.”

Still, the little girl from the fairy tale eventually confronted three bears, and so too the new Fed chief likely has trouble headed his way as he tries to keep the economy from overheating or getting cold. A U.S. stock market that’s roared to record highs in recent months is waking up to the risks: The Dow Jones Industrial Average tumbled 666 points on Friday, the biggest drop since June 2016.

It’s not just that inflation has languished below target. A deeper concern is that economists don’t completely understand why. The nation’s unemployment rate has fallen to 4.1 percent, less than half its crisis-era peak. That’s well below where most experts believed it would begin to provoke higher wages and inflation.

“This is more of an existential question — do we even know what drives inflation?” said Julia Coronado, founder of research firm MacroPolicy Perspectives LLC in New York and a former Fed economist.

This complicates Powell’s task in contemplating how fast to pull away the proverbial punch bowl as the economy gains momentum. In December, the median projection from Fed officials called for three quarter-point interest rate increases in 2018, but more could be needed.

On Friday, Dallas Fed President Robert Kaplan said three rate hikes this year is the base case, though “it could be more than that, we’ll have to see.” About an hour later, speaking at a different event, San Francisco Fed President John Williams sounded more like he wants to stay the course: “I don’t see an economy that’s fundamentally shifted gear” and “we should stick to that plan” for gradual rate hikes, he said.

Global growth has picked up, jobs gains continue at a robust monthly pace, business investment has risen in recent months and Congress has just passed a set of tax cuts. On the other hand, the Fed’s preferred gauge of inflation, while creeping up to 1.7 percent in 2017, remains sluggish.

“The good news is inflation has been cooperating recently,” said Michelle Meyer, head of U.S. economics at Bank of America Corp. “But if we fail to see a further acceleration of inflation or see a deceleration, that does create a lot of problems.”

Political flareups, particularly those expressed on Twitter, might also intervene. President Donald Trump, who promoted Powell from Fed governor to succeed Janet Yellen as chairman, has made clear his affinity for low interest rates, as well as his disdain for Washington protocol. If inflation does finally respond to the tight labor market and Powell quickens the pace of rate hikes, he may face the sharpest White House criticism aimed at the Fed since the Nixon administration.

In the meantime, the more existential portion of the inflation question has already resulted in pressure on Powell to initiate a formal re-examination of the Fed’s 2 percent inflation target. The issue bears watching. Even if the Fed doesn’t end up altering its policy, simply reviewing it might signal Powell will tolerate some period of above-target inflation.

The question of financial stability also looms with low rates helping to fuel a record run for stocks. The two most recent expansions in the U.S. crashed to their respective ends not because the Fed slammed the brakes on an overheating economy, but when asset bubbles burst — tech stocks in 2001 and housing in 2007.

Bond yields have been near historic lows though they’ve climbed in recent months and spiked higher Friday after a stronger-than-expected January U.S. jobs report. The Labor Department release showed wages picking up, which investors fear may prod the Fed into hiking at a faster pace. Stocks were also rattled.

Powell’s ultimate test, however, will come if recession strikes, no matter what the cause. By most economists’ estimates, the benchmark federal funds rate is unlikely to reach 3 percent any time in the next three years. In a downturn that means the Fed may end up pushing rates back to zero and, once again, feeling more is needed.

From 2008 to 2014, the Fed resorted to massive bond buying in an attempt to depress long-term borrowing rates. Those asset purchases ballooned the central bank’s balance sheet to $4.5 trillion and it only began to shrink gradually its holdings in October.

The economic impact of bond purchases is still being debated, but the policy proved deeply unpopular with many Republican lawmakers, who see it as enabling deficit spending and distorting financial markets.

“The large size of the balance sheet has definitely been a political obstacle for the Fed,” said Thomas Simons, a senior economist at Jefferies LLC in New York. “It draws a lot of scrutiny to everything the Fed does, so having to restart that program would refocus that scrutiny again.”