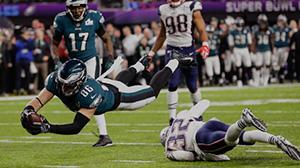 The Philadelphia Eagles won the Super Bowl for the first time after beating Tom Brady’s New England Patriots 41-33 in an extraordinary encounter in Minneapolis.

On a night when records tumbled and the expected norms of an NFL game went out the window, the Eagles – led majestically by quarterback Nick Foles – produced a brilliant offensive display to deny the Patriots a record-equalling sixth Super Bowl crown.

Zach Ertz’s touchdown with less than three minutes remaining put the Eagles into a five-point lead, but it took Brandon Graham’s sack on Brady just moments later to seemingly put the game beyond the reigning champions.

Even then the Eagles had to withstand a late march downfield by Brady, but victory was finally assured when a Hail Mary attempt came to nothing as the clock ticked down to zero.

In a game featuring just one punt and one sack – Graham’s key hit on Brady – the action was breathless and, for the most part, unprecedented in NFL history.

Chief among the highlights was the glorious moment when Foles – later named the game’s Most Valuable Player – caught a pass from tight end Trey Burton on a gutsy trick play on fourth-and-goal, making him the first player ever to throw and catch a touchdown in a Super Bowl.

Foles also threw for three touchdowns from 373 passing yards, as the 29-year-old Texan capped off his fairytale rise since being drafted in to replace injured regular Eagles quarterback Carson Wentz three games from the end of the regular season.

Opposite number Brady, meanwhile, will be left to reflect on his 505 passing yards – a new Super Bowl record – and three touchdown passes and wonder just how he failed to add to his five Super Bowl rings.

The explosive nature of the two offenses saw the Eagles and Patriots combine for 1,151 yards in total, a record not just for a Super Bowl but for any regular- or post-season game in NFL history.

Watch the moment the Eagles won the Super Bowl

Other notable stats from the game include:

A tale of two trick plays

Another takeaway statistic from this game was the fact that there were more passes thrown to the two quarterbacks than their were either sacks or punts.

Foles’ successful end-zone catch late in the second quarter was a moment of tactical brilliance from Eagles coach Doug Pederson in his first ever Super Bowl, but was he inspired by the exact same play by opposite number Bill Belichick?

Earlier in the second quarter the Pats ran their own trick play when Danny Amendola turned quarterback and tossed the ball to a wide open Brady who just couldn’t haul it in.

It was only the third time in their long association that Brady and Belichick had attempted such a move. Brady caught the other two.

As it was, the ball was soon back in the Eagles’ possession and in the end zone, former Patriot LeGarrette Blount running in for a touchdown.

What they said – reaction to a superb contest

MVP and Eagles quarterback Nick Foles: “I felt calm all night, we are such a great group of guys, we felt confident. We just went out there and played football. We’ve been dreaming of this since we were little kids.”

Philadelphia Eagles owner Jeffrey Lurie: “If there’s a word called everything that’s what it means to Eagles fans everywhere. This is for them.

“It’s the most unique group of men, I’ve never seen a group in all my life come together like this. We lost our franchise quarterback and we are world champs. The coaches are beyond great.

“I’d like to dedicate this to all Eagles fans around the world.”