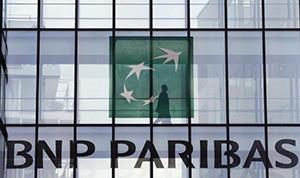 PARIS: BNP Paribas slightly increased its 2020 profitability target on the back of a strengthening European economy, although its quarterly earnings came below expectations due to higher costs and provisions against two specific corporate clients.
The French bank’s net profit fell to €1.43 billion in the fourth quarter from 1.44 billion a year earlier, below the €1.59 billion expected by analysts in a Reuters poll.
Revenues fell 1.2 percent to €10.53 billion, versus the €10.47 billion predicted by analysts. BNP Paribas also set a 2017 dividend of €3.02, up 11.9 percent from last year.
France’s biggest bank confirmed its 2020 targets, but said it was now targeting a return on equity of above 10 percent in 2020 versus a target of 10 percent disclosed in March last year.
“In a lackluster interest rate and market environment, the business activity of the group developed vigorously, sustained by a gradually stronger European growth,” the bank said in a statement.
BNP Paribas’ cost of risk, a measure which reflects how much is set aside for bad loans, rose to €264 million in the fourth quarter at its investment banking unit, from €70 million a year ago.
Revenues at the corporate and institutional banking (CIB) division also dropped by 6.9 percent. Fixed income trading declined by 27.4 percent, although equity and prime services revenue rose 12.1 percent.
The French bank outperformed the big five US banks that on average reported fixed income, currencies and commodities revenues down 31 percent, and equities trading 7 percent lower.
BNP Paribas has said it aims to grab market share from rivals pulling back from investment banking even as its moves ahead with its own cutbacks.
The bank has also embarked this year on a €3 billion plan to bring in new digital technologies in response to changing customers’ behavior, with an aim to making it run more efficiently by 2020.