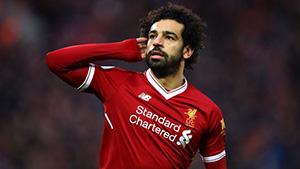 The race for the Premier League’s Golden Boot is well and truly on, after both Mohamed Salah and Harry Kane netted in Liverpool’s 2-2 draw with Tottenham at Anfield.

To the delight of Fantasy Football managers across the country, Egypt international Salah bagged a double while Kane scored a late penalty to secure Spurs a valuable point.

The red-hot duo – both set to represent their countries at the World Cup this summer – are leading the way with a gap opening up over the rest of the chasing pack.

George Pitts takes a look at the race for the Premier League’s Golden Boot, with odds from Sky Bet, to decide who is primed to earn the accolade in May…

Can the Spurs striker make it three Premier League Golden Boot awards in as many seasons? He is certainly making a good case for it.

The 24-year-old has scored 22 goals in 25 league appearances this term. Sunday’s late penalty, which was his 100th goal in the top flight, put him one ahead of Salah in the scoring charts.

He is just seven behind last season’s winning tally and the competition from Salah means he cannot afford a drought – to win the Golden Boot again, he is surely going to have to surpass that tally.

Next up for Tottenham is the north London derby with Arsenal at Wembley.

Kane has scored six in seven appearances against the Gunners and he will be keener than ever to do so again here.

Spurs are in the hunt for a top-four finish and Kane will be absolutely key to that.

Salah is having a sensational first season with Liverpool, which has helped ease the loss of Philippe Coutinho to Barcelona.

The 25-year-old’s playing style has often been compared to that of Lionel Messi by pundits, and it is hard to disagree. His left-sided preference, deft touch and a low centre of gravity makes him a handful to track when he has the ball at his feet.

At a rate of 93 minutes per goal, he has a better record than Kane (97), while he has also registered more assists than his Spurs rival with six to Kane’s one.

The £34m purchase has proved Chelsea wrong, after they barely gave him a chance following his arrival from Basel.

He is incredibly consistent and making ground on Kane. Providing he stays fit, Salah could well cap a brilliant return to England with the Golden Boot.

The Premier League’s 2014/15 Golden Boot winner is not a certain starter at Manchester City, but he was a beneficiary of Gabriel Jesus’ injury at the turn of the year as it gave him a regular run of games.

As Kane and Salah lead the pack, Aguero is the next and the only player keeping within touching distance of the leading duo.

Aguero is still five behind Kane, but he is in the best, free-flowing side in the division which keeps him right in the frame.

He has a slightly worse goals-per-minute ratio (100) than the front two, but his ability in and around the box has been in evidence throughout a sensational spell in England’s top flight.

He has scored five in his last five Premier League games, but Jesus’ return was initially expected towards the end of February, which could hamper his chances of making ground on his rivals.

Jurgen Klopp Reveals What Liverpool Must do to Beat Real Madrid