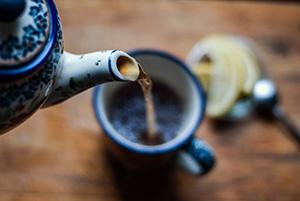 Smoking cigarettes and drinking too much alcohol both raise your risk for developing esophageal cancer, which affects the tube connecting the throat to the stomach. Now, a new study published Monday in the Annals of Internal Medicine finds another lifestyle linked to the cancer, this one more surprising: drinking hot tea, if people also smoke and drink alcohol.

Among people who regularly smoked cigarettes and drank at least one drink per day, drinking hot tea was linked to a five-times higher risk of developing esophageal cancer, compared to those who didn’t do any of those three habits. In people who didn’t have those two vices, however, drinking tea did not seem to have a significant effect on cancer development.

“We found that the association between high-temperature tea consumption and esophageal cancer risk was dependent on alcohol and tobacco consumption,” said lead author Jun Lv, a professor of epidemiology and biostatistics at the Peking University School of Public Health in China, in an email to TIME.

In the study, researchers analyzed data from more than 456,000 Chinese adults between ages 30 and 79 who didn’t have cancer at the study’s start. People were asked to answer questions about their tea, alcohol and cigarette consumption. Then researchers followed the people in the study for about nine years to see how many developed esophageal cancer. (About 1,700 total people did.)

The study was only observational, so a cause-and-effect link cannot be determined. But the authors speculate that hot tea may damage the tissue lining the esophagus, which could increase the chance of injury from other risk factors like smoking and drinking. Another potential way that hot tea may contribute to cancer risk, the authors write, is through the formation of inflammatory compounds, which occurs after repeated irritation to the esophagus.

In recent years, there has been some contradictory information about tea and cancer. In 2016, the World Health Organization concluded that hot beverages above 149 degrees F, including tea, were linked to an increase risk of esophageal cancer. However, tea has been singled out many times in the past for its potential cancer-fighting abilities. Green tea, in general, is associated with a lower risk of cancer.

The findings suggest that tea may contribute to cancer formation under the right circumstances, Lv says, but it’s probably not the main factor at work. “It’s important to abstain from high-temperature tea in excessive alcohol consumers and smokers for esophageal cancer prevention,” Lv wrote in an email. “Of course, keeping away from both tobacco and excessive alcohol use is the most important means for esophageal cancer prevention.”