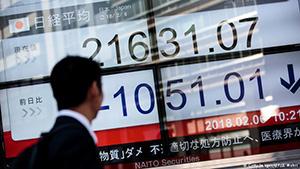 Japan’s benchmark Nikkei index dropped as much 7.1 percent before recovering slightly. This follows a big dip in the US on Monday. Dow and S&P futures were down over 4 percent in Asia, suggesting more of the same.

Japan’s Nikkei 225 Stock Average plunged by more than 7 percent in early trading on Tuesday, suffering its biggest one-day points-drop since 1990.

The Nikkei lost 1,589.17 points by Tuesday afternoon, before recovering slightly. The index closed at just above 21,500 points, down 5 percent.

All other regional markets were also lower.

It follows a day of heavy losses on Wall Street, which saw the Dow Jones Industrial Average, an index of 30 major US corporations, close at 24,346.13, down 4.6 percent.

Europe’s Monday losses were less pronounced by comparison, but markets were red across the board. Germany’s DAX shed 0.76 percent, while London’s FTSE 100 and France’s CAC 40 both dipped by roughly 1.5 percent.

Top Japanese officials moved to downplay concerns on the trading floor on Tuesday.  Finance Minister Taro Aso declined to comment on share prices, but insisted that corporate performances were not getting worse.

The Reserve Bank of Australia, the country’s central bank, said it would leave cash rates (the interest rate that banks pay to borrow) unchanged at 1.5 percent, citing household consumption as a “continuous source of uncertainty.”