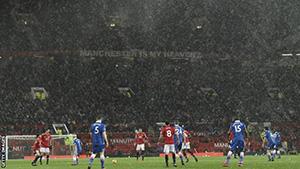 The Premier League is considering introducing a winter break when a television rights deal is next agreed.

The top leagues in Germany, France, Italy and Spain all take time out in mid-season.

The Football Association has previously said a winter break is not feasible until the end of the current television deal in 2019.

Talks have been ongoing for several months and are understood to have been constructive.

A January break has been under discussion, so if it gets agreed it would not impact on the traditional festive football schedule.

An announcement on the next Premier League TV rights is expected next week. The league is seeking an increase on the current £5.14bn deal which includes 168 live matches a season, with Sky holding five packages of games and BT two.

The prospect of a winter break is referenced in the tender documents that have been sent to broadcasters. The next TV deal will cover 2019 to 2022.

“The Premier League has been in discussions with the FA and EFL for several months regarding the challenges of the increasingly congested English football calendar and ways in which we can work together to ease fixture congestion while also giving players a mid-season break,” the Premier League said in a statement.

“Provided space can be found in the calendar, we are open to this in principle and will continue constructive discussions with our football stakeholders to seek a workable solution.”