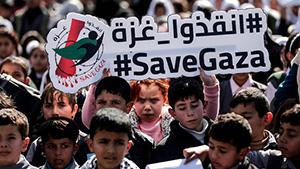 Over the past year, more and more voices within the Israeli defense establishment have been warning that the worsening humanitarian crisis in the Gaza Strip could lead to a military conflict, or alternatively to a situation in which Israel would have to take on responsibility for civilian infrastructure in the strip to prevent a total collapse.

The reconciliation process between Fatah and Hamas has reached a stalemate, with neither side willing to compromise, freezing the implementation of the agreements the two warring factions signed in Cairo last year.

Egypt, which mediated the latest reconciliation agreement, keeps the Rafah border crossing closed despite the fact Hamas has relinquished responsibility and control over the border crossings in Gaza to the Palestinian Authority. Very few Gazans are allowed to cross through the Erez border, linking Gaza with Israel, the West Bank and the world beyond, and the Kerem Shalom border crossing has seen a drop in activity as the economic crisis in the strip affects the amount of goods coming in.

Qatar, once the de facto cash machine of the strip, and international aid organizations have reduced their projects and operations in Gaza, with UNRWA facing a severe cut in US aid money.

The Gaza Strip is facing several infrastructure issues that only exacerbate the declining humanitarian situation.

Three years ago, the UN released a report which determined that by 2020, there will be no clean drinking water left in Gaza due to the terrible infrastructure, over-pumping of the coastal aquifers and the high amounts of chlorine in the water. Consequently, the water is too salty to drink and residents use it for hygiene and cleaning purposes only.

Residents are forced to use public faucets with aquifer water that has been treated in public desalination facilities. Those who can afford to, purchase water from companies that operate private desalination plants, at a high price, four times the price that Israelis pay for their drinking water.

Security officials have long been warning decision makers that the water crisis in Gaza can blow up in Israel’s face. Already in 2013, a senior security establishment official told Ynet that the most serious threat to the stability between Israel and Gaza in the coming decade is the water crisis and there is an urgent need to erect a huge desalination plant on the Gaza coast.

Currently, there is one operational plant and an additional one under construction near Khan Yunis. Desalination plants require large amounts of electricity which is also in short supply. Today, only 10% of Gaza’s water is from desalination plants or from sources in Israel.

Pollution and a health hazard for Israel too

About a third of Gaza families are not connected to the sewer system and the options available to them—septic pits and open sewer channels—pose a consistent risk of contamination to the aquifers. An ever increasing amount of Gazans contact diseases through drinking the polluted water, which are especially harmful to children and pregnant women.

The contamination problem is not limited to Gaza—it poses a danger for Israel as well. As waste flows out to the Mediterranean Sea, currents push the water straight towards the Ashkelon coast where an Israeli desalination plant is located.

To solve the problem, the international community supplied funds for a modern waste treatment plant in northern Gaza at a cost of $100 million. The plant is ready for use but due to the electricity crisis, and the Palestinians not considering the plant a priority, it remains unused.

Connecting the plant via a cable from Israel was proposed and the World Bank has agreed to fund it, but the planning complexities involved can take years.

Electricity: half of the daily requirement

There is one power station in Gaza, constructed in 2002; it operates on diesel. Its maximum output is 140 megawatts a day but it only produces 60-80. Israel supplies the strip with an additional 120 megawatts daily and Egypt sends about 30; for a total of about 200 megawatts a day while its actual needs are about 400 megawatts.

For the past few years, Gaza residents receive about 6-8 hours of electricity a day. The rest of the time residents must use private generators for their homes. The problem worsens every few years as the Palestinian Authority, which pays for the diesel, insists that Hamas pay the taxes on the fuel purchased from Israel, while Hamas refuses, all while charging Gaza residents for their use.

These disputes cause tension between the two factions and the PA precedes to decrease the amount of diesel it sends which leads to less hours of electricity that homes receive. During the height of winter, the average home in Gaza received only 3-4 hours of electricity daily, and that is what led to the recent public outcry.

The last major crisis was solved, temporarily. But it is only a matter of time until it will flare up again. All the solutions proposed (a floating Turkish power station, connecting the station to the gas pipeline) were not implemented and the crisis is causing much frustration among the populace.

Unemployment at 43%, increase in suicides

The Gaza Strip is suffering from a lack of foreign investments and workers are no longer allowed to work in Israel. According to the World Bank, unemployment has reached 43%, among youth, it is as high as 60%. Poverty is on the rise and so are suicides. Many Palestinians are also turning to drugs to escape the harsh reality.

The amount of exports is only 6% of what it was before the blockade ten years ago. There are plans to allow workers into Israel but they are on hold. The amount of new employment opportunities is minuscule and offer little hope; therefore, most Gaza residents are reliant on international humanitarian aid organizations.

After Operation Protective Edge, representatives of nations donating funds to Gaza met at a conference in Cairo and pledges of $3.5 billion were made for the reconstruction effort. According to a World Bank report, by the end of 2017, only 35% of that sum was delivered. Until the end of last year, 7% of the necessary building materials for full reconstruction were transferred to Gaza.

These dire statistics point to the unbearable situation Gaza residents are living in which creates tremendous pressure that may come to harm Israel, either directly or indirectly. Talk of building a supervised seaport or an airport has floated among Israeli political and security officials but have not progressed beyond the real, of theory. So far, no concrete measures have been taken to ease the distress.

Crossing the border for a prison meal

Phenomena such as reports of Palestinian students turning to prostitution out of desperation have been reported. The security establishment is wary of the day that the official failure of the reconciliation talks will be announced, as Hamas refuses to retake responsibility for civilian control of Gaza but will continue to control the military and security apparatuses.

Lately, Hamas has set up checkpoints on roads leading to the Erez border crossing (for people) in northern Gaza, and at Kerem Shalom in the south (for merchandise). An increasing number of Palestinians, including children, have been caught crossing the fence into Israel as at least in prison they are provided with three meals a day and free cigarettes.

Most are returned to Gaza, after undergoing questioning by the Shin Bet, but last week, four such infiltrators were caught near the fence with knives and a grenade. The investigation is ongoing, but the possibility that they were only carrying weapons in order to guarantee their imprisonment in Israel is being seriously considered.

Israel can take steps to ease the economic situation in Gaza but prefers taking a cautious approasch. As of now, the Shin Bet is opposed to the idea of allowing thousands of Palestinian laborers into Israel due to the possibility that some may take advantage and bring in weapons or carry out terror attacks.

Opponents argue that Hamas has in the past hidden weapons on the bodies of Palestinians allowed into Israel for medical treatment. Terror funds aimed at the West Bank have also been smuggled in that way. The construction of a seaport is supported by the security establishment on condition that all merchandise passing through will be inspected by Israel.

Two weeks ago, a senior IDF officer described that the situation in the Gaza Strip as the worst it has ever been and approaching the level of the crisis in Somalia. Palestinian government statistics corroborate the data. Unemployment is skyrocketing, more than half of the educated population is not working and some 100,000 Gazans have been imprisoned over the last year over unpaid debts.

In any case, officials agree that the situation will only deteriorate in the coming months and the dependency on Israel will continue to grow.