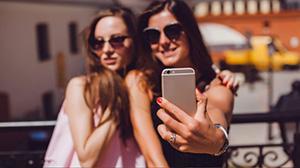 According to a recent study published in the International Journal of Mental Health Addiction, if you take three selfies and day and post them to social media, you may be suffering from a condition called “acute selfitis”.

While “selfitis” began as a hoax mental health disorder in 2014, researchers from Thiagarajar School of Management, Madurai, India and the Psychology Department at Nottingham Trent University in the UK decided to take a closer look to test if there was something to selfitis after all.

They then developed a Selfitis Behaviour Scale (SBS) which included “borderline selfitis”, for people who take selfies at least three times a day, but don’t post, and “chronic selfitis”, which is characterised by an “uncontrollable urge to take photos of one’s self … posting the photos on social media more than six times a day”.

But before you rush out to see a mental health professional to work through your selfitis, let’s think about who is most likely to take selfies. Women. Even though men were included in the study, taking selfies is a behaviour more likely to be associated with women. According to Selfiecity, a project that tracks selfies around the world, women outnumber men when it comes to posting selfies online.

Let’s not forget that ever since Freud, there has been a long tradition of mental health researchers taking behaviours which women predominantly engage in, and presenting them as pathological and in need of correction.

According to the selfitis researchers, people suffering from the disorder took selfies in an attempt to increase their self-confidence, seek attention, improve their mood, connect with the environment around them (to create a record of memories), increase their conformity with the social group around them, and to be socially competitive.

That’s hardly surprising. Many other behaviours deemed quite normal are driven by similar kinds of motivations.

We live in a culture where women are encouraged and lauded for displaying themselves. Whole industries are built around other people photographing, manipulating and displaying women’s images. Such behaviour is a ubiquitous element of capitalism.

Advertisers flogging everything from cars to furniture base their entire marketing efforts around pictures of women, but that’s all okay because it’s business.

Professional photographers, who are typically male, are allowed to spend hours obsessing over images of women because it’s art. Male photographers in particular are lionised as geniuses and visionaries. If words like “obsessive” and “compulsive” are used to describe them, they’re meant in a good way. It’s a sign of their commitment to their art. It’s the creative genius overcome by his female muse.

But when women dare to take matters into their own hands and capture and manipulate their own image, they’re branded as out of control narcissists requiring professional help.

Aside from taking back control of their own image, in light of photographers such as Terry Richardson, Bruce Weber and Mario Testino allegedly sexually abusing their models during photo shoots, taking selfies is starting to look like a sensible and sane choice.

It also seems entirely rational for women to use selfies to build followings and make a business out of it. In a culture that values women primarily for their beauty, isn’t it smarter for women to earn money and social status out of their objectification instead of someone else cashing in on it?

Now, I’m not suggesting that taking selfies is necessarily the most productive or elevated activity you can engage in. Personally, I’m not a selfie taker.  But trying to present other people’s enjoyment of this activity as a mental disorder strikes me as yet another attempt to discourage people — particularly women — from being agents in their own lives.

Kasey Edwards is the author of Guilt Trip: My Quest To Leave The Baggage Behind. www.kaseyedwards.com