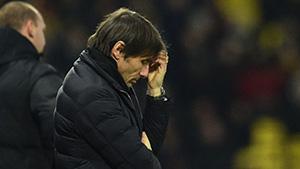 Javi Gracia’s first home Premier League game in charge of Watford ended in a 4-1 victory over 10-man Chelsea, as pressure mounts on his opposite number.

Antonio Conte suffered back-to-back three-goal defeats after a humbling defeat to Bournemouth last time out, and it remains to be seen whether he will remain in charge for the remainder of what has been a disappointing title defence.

Sky Bet make him 1/4 to be the next Premier League manager to leave – that’s from 2/1 prior to the match – with former Barcelona boss Luis Enrique among the favourites to take over.

“Very bad from the start,” said Conte when asked to rate his team’s performance. “It’s a difficult moment. I tried to warn everyone. Maybe I made mistakes, my choices (were) very poor. I’m talking about the starting eleven.”

The visitors indeed started slowly at Vicarage Road and were in trouble from the moment Tiemoue Bakayoko received his marching orders for a second yellow on 30 minutes.

Shortly before half-time, Watford were awarded a penalty when Gerard Deulofeu was brought down by Thibaut Courtois and Troy Deeney made no mistake to send them in with both a goal and a man advantage.

Chelsea seldom looked threatening in the second half, but a moment of brilliance from Hazard had them level as the Belgian curled a 20-yard strike into the corner on 82 minutes.

Watford’s response was to swarm forward and they were immediately rewarded when Daryl Janmaat exchanged passes with substitute Roberto Pereyra before coolly finishing past Courtois.

Four minutes later, Deulofeu danced into the Chelsea box to add a deflected third and in the first of six added minutes, Pereyra lashed home a fourth, landing a 500/1 touch for a handful of punters who backed a 4-1 home win in-play.

Watford had been 200/1 to win 4-1 prior to the match with Sky Bet, whose largest winning ‘RequestABets’ on the night were both 80/1 chances.