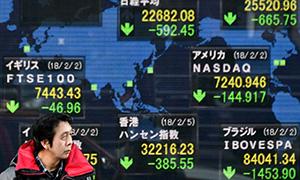 The FTSE 100 has posted its worst one-day performance since last April, as the London index picked up from a Wall Street sell-off at the end of last week. Indices also fell in Europe and Asia. Here we look at some of the issues raised by the sell-off.

Why are stock markets falling?

For several weeks, economists and analysts have warned that inflation levels in major economies could increase this year beyond the 2% to 3% that central banks believe is good for developed countries. Official US figures turned those concerns into a sell-off last Friday, after they showed average wage rises in the US had reached 2.9%. The data increased fears that shop prices would soon rise further, increasing the pressure for high interest rates to calm the economy down. Investors then bolted at the prospect of an era of cheap money – which encourages consumers and companies to spend – coming to an end. Over the past month, several members of the US central bank, the Federal Reserve, have argued that three 0.25% interest rate rises scheduled for this year could become four or five.

What is inflation and why does it matter?

Is there worse to come?

There is every prospect that the US economic data will continue to strengthen, increasing the potential for higher interest rates. President Donald Trump’s tax reform bill, which gained approval in Congress before Christmas, will inject more than $1tn (£710bn) into the US economy, much of it in the form of corporation tax cuts. Many firms have pledged to give a slice of the cash to their workers. Decades of flat wages should mean that increases expected in 2018 and possibly 2019 are too small to trigger a reaction from the central bank, but investors are betting rates will rise. As a consequence, stock market jitters could continue.

Is it a threat to the global economy?

Many developing world economies have borrowed heavily in dollars and will be stung by the higher cost of servicing their debts. On the other hand, a booming US economy will suck in imports from those nations, boosting the incomes of the developing world. However, the eurozone looks unlikely to increase interest rates until its recovery is more firmly anchored. That means the euro will continue to rise in value against the dollar, making it harder for European countries to export to the US.

What does it mean for the UK economy?

A falling stock market should not affect the economy immediately. Its main effect should be to limit the availability of shareholder funds for investment, affecting the long-term health of the economy. But there is a strong feedback loop from falling wealth, such as share portfolios, into lower consumer spending. Shoppers measure their financial well-being in terms of their asset-based wealth as much as their income. As a result, a big fall in share prices could damage the economy.