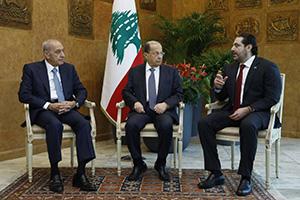 Tensions between Aoun and Berri escalated after the president’s son-in-law Foreign Minister Gebran Bassil called the speaker a “thug.”

BEIRUT: President Michel Aoun, Parliament Speaker Nabih Berri, and Prime Minister Saad Hariri met Tuesday at the Baabda Presidential Palace, with all three leaders reaching an agreement over the need “to preserve Lebanon’s unity and stability” in the wake of the recent impasse to hit the country.

According to a statement released following the meeting, Lebanon’s top officials agreed “to not allow any political dispute to threaten the civil peace enjoyed” while vowing to address recent disagreements within the framework of the Constitution and applicable laws, in a veiled reference to the feud pitting Aoun against Berri.

This commitment to preserving stability comes in the lead up to Lebanon’s expected participation in three international conferences in the coming weeks and months to bolster its economy and security apparatus, the statement added.

The three leaders also addressed the recent Israeli aggressions along Lebanon’s southern border, after Israel initiated the construction of a concrete wall on Lebanese territory, “in clear violation of U.N Security Council Resolution 1701.”

Last week, Israel put forth its claim to the southern Lebanese oil block as well that is situated in disputed waters.

Block 9 is located in a disputed maritime area of 874 square kilometers, with Lebanese officials considering Point 23 on the list of geographical coordinates to be tri-equidistant between Lebanon, Cyrus, and Israel as the southwestern limit of its EEZ, while Israel considers Point 1, which falls around 17 kilometers north of Point 23, as the endpoint of its northern maritime border with Lebanon.

In response to this “aggression”, a security meeting chaired by Aoun and attended by Hariri along with the heads of Lebanon’s security agencies will be held on Wednesday, the statement said.

Aoun and Berri have been locked in a feud for the past two months over a decree that grants seniority to army officers that served under the president in the late 1980’s.

Berri argues the decree, signed by both Aoun and Hariri, is unconstitutional because it lacks the signature of Finance Minister Hassan Ali Khalil, a close aide to the speaker and a member of his Amal Movement.

Tensions between Aoun and Berri escalated after the president’s son-in-law Foreign Minister Gebran Bassil called the speaker a “thug” in a leaked video shot while the Free Patriotic Movement leader was meeting with residents of his home district Batroun as part of the FPM’s campaign ahead of parliamentary elections in May.