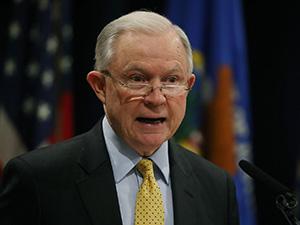 Attorney General Jeff Sessions said the FBI required a “fresh start” in order to win back the country’s trust in law enforcement, which included the controversial firing of Director James Comey, according to an interview published Tuesday.

The former Alabama senator told the Washington Examiner last week in Pittsburgh that the new beginnings were necessary and expressed confidence in new FBI Director Christopher Wray. The interview occurred the same day the country learned that Deputy Director Andrew McCabe would be stepping down earlier than expected.

The report indicates that Sessions had a “measured” response when speaking about McCabe’s departure last month and Comey’s abrupt dismissal by President Donald Trump last May.

“Well, I have believed it was important to have a fresh start at the FBI, and actually it was in my letter to the president when I recommended Comey’s removal,” he said. “I used the words ‘fresh start,’ and the FBI director is Chris Wray, a very talented, smart, capable leader.”

Sessions continued, “I think it will give them an opportunity to go straight to the American people and say, ‘We are gonna win your confidence.’”

Indeed, Sessions did use the phrase “fresh start” in his May recommendation letter to “remove” Comey. It also served as an introduction to Deputy Attorney General Rod Rosenstein’s memo on why Comey should be fired for his handling of the investigation into Hillary Clinton’s use of a private email server while she was secretary of state.

At a time when Trump has repeatedly attacked the FBI and Justice Department, Sessions also said his department had to go the “extra mile” to avoid politicizing issues or investigations.

“Well, I would just say it this way. The Department of Justice, which includes the FBI, we all, we tend to be defensive,” Sessions said. “At this point in time, I think we need to go the extra mile to make sure that everything we do is not political. Everything we do is based on law and facts. And, whether we like it or not, there’s been some erosion in the confidence of the American people at the FBI and Department of Justice.”

He later added, “And we need to earn that back, and because the heart and soul of the Department of Justice is very good.”

The job status of both Sessions and Rosenstein, who appointed Robert Mueller as special counsel roughly a week after Trump fired Comey, has been a hot-button subject for months now.

Trump was reportedly enraged at Sessions for not protecting him after learning about Mueller’s appointment. When asked by reporters last week about dismissing Rosenstein, the president said, “You figure that one out.”