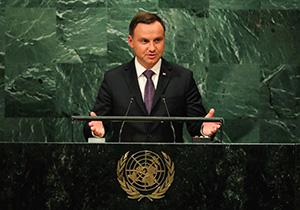 Despite protests by Israel and the United States, the bill criminalizing suggestions of Polish complicity in the Holocaust was signed into law.

Polish President Andrzej Duda on Tuesday signed into law a bill making it a crime to blame the “Polish Nation or Polish State” for culpability in the Holocaust, despite a furious reaction from Israel and warnings from Washington that this could damage US-Poland ties.

Hours before he signed the bill, however, Duda said he would send it to the country’s Constitutional Tribunal for judicial review, leaving open the possibility of a last-ditch amendment to the legislation.

The Foreign Ministry in Jerusalem issued a statement saying: “We hope that within allotted time until the court’s deliberations are concluded, we will manage to agree on changes and corrections.”

The statement said that Israel “continues to communicate with Polish authorities and has expressed its reservations regarding the new Polish law,” and that the two countries have a “joint responsibility to research and preserve the history of the Holocaust.”

Under the heading “Protection of the reputation of the Republic of Poland and the Polish Nation,” the legislation reads: “Whoever publicly and contrary to the facts attributes to the Polish Nation or to the Polish State responsibility or co-responsibility for the Nazi crimes committed by the German Third Reich… or for any other offenses constituting crimes against peace, humanity or war crimes, or otherwise grossly diminishes the responsibility of the actual perpetrators of these crimes, shall be liable to a fine or deprivation of liberty for up to three years.”

The bill states that if the “perpetrator” acts unintentionally, “they shall be liable to a fine or restriction of liberty.” The bill excludes those acting “within the framework of artistic or scientific activity,” and said the law is applicable irrespective of where the “prohibited act” took place, and regardless of whether the offender is a Polish citizen or a foreigner.

Under this legislation, using the term “Polish death camp” instead of “Nazi death camp” to describe extermination camps on Polish soil such as Auschwitz-Birkenau or Treblinka could be punishable by a fine or imprisonment.

The Trump administration expressed “disappointment” over Poland’s decision. US Secretary of Defense Rex Tillerson said in a statement Tuesday that enactment of the law “adversely affects freedom of speech and academic inquiry.”

“The United States reaffirms that terms like ‘Polish death camps’ are painful and misleading. Such historical inaccuracies affect Poland, our strong ally, and must be combated in ways that protect fundamental freedoms.”

Deputy Foreign Minister Tzipi Hotovely said Israel has made it clear to the Polish government that “it will not accept any law that deals with silencing history and the involvement of Polish citizens in the murder of Jews during the Holocaust.”

She said Israel will continue working through diplomatic channels to amend the law, and that these efforts will continue until the process in the Constitutional Tribunal runs its course.

“We had urged President Duda to defer any final decision on ratifying the legislation until at least having met with a delegation of Jewish leaders,” he said. “He has decided, bizarrely, that this is not necessary. As a consequence, the European Jewish Association will – as we successfully did in the past on efforts to ban kosher slaughter – challenge this matter in Poland’s Constitutional Tribunal.”

Margolin also wrote to the heads of all the EU institutions, asking them to reprimand the Polish government. “It seems inconceivable that an EU member state can be permitted to whitewash history by imposing draconian legislation that can imprison people for holding an alternative view on what happened during Europe’s darkest days,” he asserted.

“The president of Poland chose to stick to the miserable stance of distorting the facts and denying the Holocaust,” she said. “Israel cannot stand silent over this, and we must bring back the Israeli ambassador to Poland immediately and expel the entire Polish diplomatic staff from Israel.”

Moalem-Refaeli said that “this is a dramatic step, but it sends a clear message that we cannot accept the distortion of history, and any country that does so is not a friend of Israel.

“It is completely clear that the Final Solution for the Jewish Problem at every stage is the responsibility of the Nazi regime, but we cannot deny the fact that Poles took a direct part in murdering Jews during the Holocaust,” she said.

“It’s absurd that a shameful law like this, which is trying to rewrite the horrible history of Jews in Poland, was authorized, when everyone knows the Polish people took part in the horrors that took place in the Holocaust. It’s an insult and shames all of us, and most of all Holocaust survivors from Poland. The law paves the way for Holocaust deniers, and the Polish government has the responsibility to cancel it quickly and apologize to the survivors,” Ben-Ari said.

Zionist Union MK Itzik Shmuli, who initiated a bill that would make it illegal to minimize the role of Nazi collaborators, said that this was a shameful day in Poland’s history.

“Poland is going down in history as the first country that passed a law denying the Holocaust. No shameful law will erase history,” he said.

Yad Vashem described the decision as “unfortunate,” noting that in discussion over the past year and a half, it had repeatedly warned Polish authorities regarding flaws in the wording of the bill.

“These flaws are liable to result in the distortion of history due to the limitations that the law places on public expressions regarding the collaboration of parts of the Polish population – either directly or indirectly – in crimes that took place on their own land during the Holocaust,” Yad Vashem said.

The Holocaust remembrance center said, as it had in previous statements on the matter, that the term “Polish death camps” is erroneous, but expressed concern that the law will have repercussions in the areas of Holocaust research, education and remembrance.

“Yad Vashem will be watchful of the implementation of the law and the decision of the Constitutional Tribunal of Poland and will study the new reality created in their wake,” it said.

The American Jewish Committee expressed “profound regret” at the development.

“Of course, Poland was the first country to be attacked by Nazi Germany, triggering the start of the Second World War, and, of course, Poland fought valiantly against the invaders, continuing to do so through an extraordinary resistance network after the country’s occupation,” Markiewicz said.

“And yes, more Poles have been honored by Yad Vashem for their life-saving efforts to protect Jews during the war than any other nation,” she continued. “But, and it is a significant but, there were acts of antisemitism, including murder, by individual Poles, even as both Poles and Jews were targets of the Third Reich. This tragic fact, and discussion about it, cannot be buried, denied or banished by a misguided law.”

Markiewicz expressed hope that the judges of the Constitutional Tribunal will recognize the flaws in the legislation and reopen the issue.

Michael Wilner contributed to this report from Washington.